According to some report, the average time spent by a person on their mobile phone is four hours. What does it mean? What is average? Does it mean that every day a person spends four hours of his day on mobile? Or does it mean that every person spends four hours daily on a mobile phone? How is the time spent by different persons vary from each other? This gives rise to a new concept in probability and statistics. This is the mean and the variability is the variance in probability and statistics.

You can do so by calculating the average of the marks obtained to get an idea of your overall performance. This average marks will tell you about the marks you are most close to.

The expectation or the mean of a discrete random variable is a weighted average of all possible values of the random variable. The weights are the probabilities associated with the corresponding values. It is calculated as,

Properties of Mean of Random Variables

If the value of the variance is small, then the values of the random variable are close to the mean.

Properties of Variance of Random Variables

Question 1: Calculate the mean and variance for a random variable, X defined as the number of tails in four tosses of a coin. Also, draw the probability distribution.

The probability distribution of X is 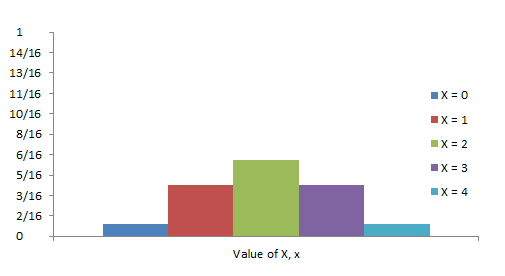 Question 2: What is the meaning of probability in statistics?

Answer: Probability refers to the measuring of the probability that an event will happen in a Random Experiment. Probability is enumerated as a number between 0 and 1, where, loosely speaking, 0 denotes impossibility and 1 denotes certainty. The higher the likelihood of an event, the more prone it is that the event will take place.

Question 3: What is the relationship between probability and statistics?

Answer: Probability deals with forecasting the possibility of upcoming events, whereas statistics includes the analysis of the frequency of past events. Probability is mainly a theoretical branch of mathematics, which studies the results of mathematical definitions.

Question 4: What is the probability formula?

Question 5: What is the example of statistics?