Thus far we have had a lot of fun with the concept of sets and their various types and applications. But it has just started. These diagrams were first introduced by John Venn as a tool to study logic. It turns out that these Venn Diagrams can also be used to study and represent sets. The fun is that these diagrams make working with sets easier and fun too! Let us see more.

A Venn diagram is a diagrammatic representation of ALL the possible relationships between different sets of a finite number of elements. Venn diagrams were conceived around 1880 by John Venn, an English logician, and philosopher. They are extensively used to teach Set Theory. A Venn diagram is also known as a Primary diagram, Set diagram or Logic diagram.

Representation of Sets in a Venn Diagram

It is done as per the following:

Just like the mathematical operations on sets like Union, Difference, Intersection, Complement, etc. we have operations on Venn diagrams that are given as follows:

The orange colored patch represents the common elements {6, 8} and the quadrilateral represents A U B.

Properties of A U B

The Intersection of Sets

Properties of A ∩ B

It means that there is NO element common to any of the three sets and the intersection of any of the two or all the three sets will result in a null or void or empty set. A – B and B – A are represented through Venn diagrams as follows: 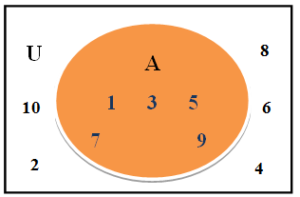 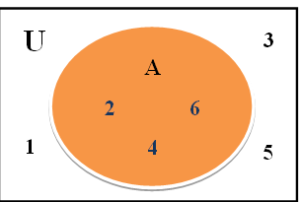 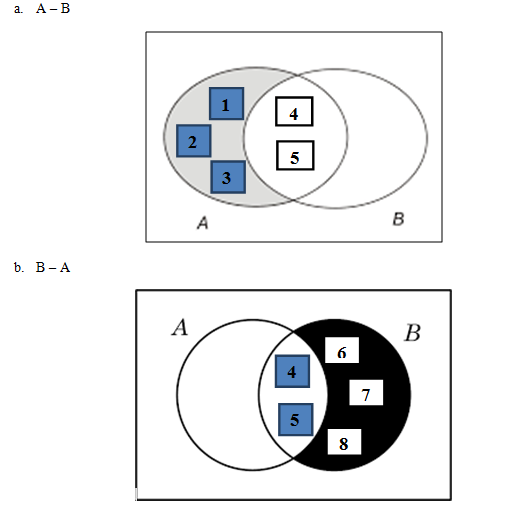 Question 2: Define the working of the Venn diagrams.

Answer: Venn diagrams permit the students to arrange the information visually so that they are able to see the relations between 2 or 3 sets of the items. They can then recognize the similarities and differences between them. A Venn diagram figure contains overlapping circles. Each circle comprises all the elements of one set.

Question 3: How can we describe a Venn diagram?

Answer: A Venn diagram is made with the overlapping circles. The inner of each circle shows a set of objects, or objects having something in common. The outside of the circle symbolizes all that a single set excludes.

Question 4: What is the medium of a Venn diagram known as?

Answer: The area of the joining of the 3 circles is the medium or middle point of a Venn diagram.

Question 5: What does the ‘U’ mean in a Venn diagram?

Share with friends
Previous
Operations on Sets
Next
Sets

sir can we prove all the set theorems using venn diagram ?

No only few sets can be define