A four-sided polygon along with two dimensions is known as Quadrilateral. A Quadrilateral can be convex or conclave based on their dimensions. If Dimensions are inside the borderline of polygon than it will be termed as a convex quadrilateral. Based on the sides, and angle there are the following six types of convex Quadrilaterals.

Learn the Basics of Rectangle and Square here.

Now let us discuss the properties of every quadrilateral separately-

Solved example for you

Question 1: In the adjoining figure, PQRS is a parallelogram. Find x and y in cm 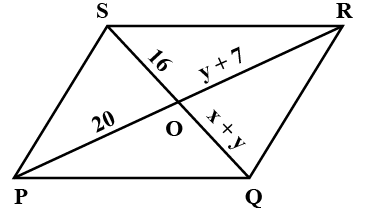 Question 2: What are the properties of quadrilaterals?

Question 3: What are the convex quadrilaterals?

Answer: When we look at quadrilaterals on the basis of their sides, angle, there are six types. They are parallelogram, rectangle, square, rhombus, trapezium and a kite.

Question 4: What are the properties of a trapezium?

Answer: The properties of a trapezium are that one pair of the opposite side is parallel. Further, the diagonals intersect each other in the same ratio. Finally, the two adjacent angles are supplementary.

Question 5: What shape has 4 sides with different lengths?

Answer: A rhombus refers to a four-sided shape that has all sides with equal length. Moreover, the opposite sides are parallel and opposite angles are equal. Further, one other interesting thing is that the diagonals meet in the middle at the right angle. In other words, they bisect each other at right angles.

Share with friends
Previous
Types of Quadrilaterals
Next
Polygon and Polyhedrons