In order to understand trigonometry, a science originally developed for solving geometric problems involving triangles, it is important to have a complete grasp over angles. Understanding the different ways of angle measurement can help you get a better grip on the subject. In this article, we will look at the degree and radian measure of angles.

What is an Angle?

Let’s start with the basics. An angle is the rotation of a ray from an initial point to a terminal point. Some commonly used terms in angles are:

Further, angle measurement is the amount of rotation performed by the initial side to get to the terminal side. There are several units for measuring angles. In this article, we will look at the most commonly used units; Degree Measure and Radian Measure.

A complete revolution, i.e. when the initial and terminal sides are in the same position after rotating clockwise or anticlockwise, is divided into 360 units called degrees. So, if the rotation from the initial side to the terminal side is (\( \frac {1}{360} \))th of a revolution, then the angle is said to have a measure of one degree. It is denoted as 1°.

We measure time in hours, minutes, and seconds, where 1 hour = 60 minutes and 1 minute = 60 seconds. Similarly, while measuring angles,

Here are some additional examples of angles with their measurements: 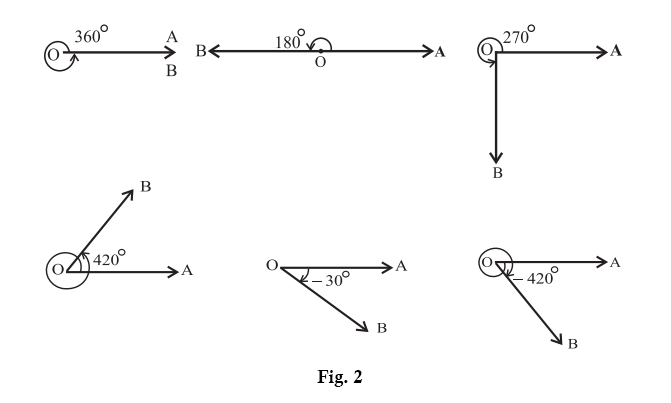 Radian measure is slightly more complex than the degree measure. Imagine a circle with a radius of 1 unit. Next, imagine an arc of the circle having a length of 1 unit. The angle subtended by this arc at the centre of the circle has a measure of 1 radian. Here is how it looks: 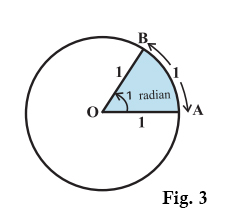 The circumference of a circle = 2πr … where r is the radius of the circle. Hence, for a circle with a radius of 1 unit, the circumference is 2π. Hence, one complete revolution of the initial side subtends an angle of 2π radian at the centre. Generalizing this, we have

The Relation between Radian and Real Numbers

Radian measures and real numbers are one and the same. Let’s see how: consider a unit circle with centre O. Let A be any point on the circle and OA be the initial side of the angle as shown below: 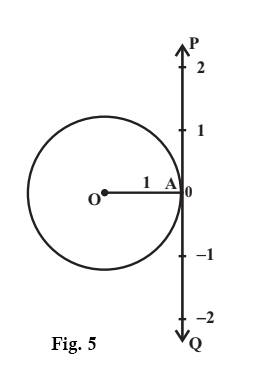 Also, let’s drag the line AQ along the circumference of the circle in the clockwise direction. After doing so, we can see that every real number corresponds to a radian measure and conversely.

The Relation between Degree and Radian Measures

By the definitions of degree and radian measures, we know that the angle subtended by a circle at the centre is:

Since degree and radian measures are the two most commonly used units in angle measurement, there is a convention in place for writing them.

Also, note that the term ‘radian’ is usually omitted while writing the radian measure. Hence, π radian = 180° is simply written as π = 180°. Further, summing up the relationship between degree and radian measures, we have

Let’s look at an example now:

Question 1: A wheel makes 360 revolutions in one minute. Through how many radians does it turn in one second?

Answer: We know that the wheel makes 360 revolutions in one minute. Hence, in one second it will make,

Question 2: What are the measures of an angle?

Answer: In geometry, an angle measure refers to the measure of the angle which forms by the two rays or arms at a common vertex. We measure angles in degrees with the symbol ° by making use of a protractor which was invented in 1801 by Joseph Huddart.

Question 3: What are the 5 types of angles?

Question 4: What is a reflex angle?

Answer: Reflex angles are angles that measure greater than 180 degrees and are less than 360 degrees. We add the measure of a reflex angle to an acute or obtuse angle in order to make a full 360-degree circle.

Question 5: What is the standard position of an angle?

Answer: An angle is said to be in standard position if its vertex is positioned at the origin and one ray is present on the positive x-axis. We call the ray on the x-axis as the initial side and the other ray is referred to as the terminal side.