In this article, we will look at different types of vectors like zero, unit, coinitial, collinear, equal and negative vectors. Further, we will solve some examples to get a better understanding.

We know that all vectors have initial and terminal points. A Zero vector or a null vector is one in which these two points coincide. It is denoted as \( \vec{0} \). Since the magnitude is zero, we cannot assign a direction to these vectors. Alternatively, zero vectors can have any direction. Some examples of zero vectors are \( \vec{AA} \), \( \vec{BB} \), etc.

Collinear vectors are two or more vectors which are parallel to the same line irrespective of their magnitudes and direction.

Important Note: In this article, we will be talking only about free vectors. Free vectors are ones which can be subjected to parallel displacements without changing their magnitudes and direction.

Now, let us look at an example to understand the different types of vectors.

In the figure given below, identify Collinear, Equal and Coinitial vectors: 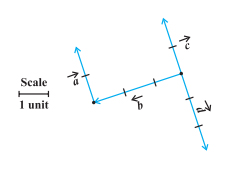 Solution: By definition, we know that

Question 1: In the given figure, identify the following vectors 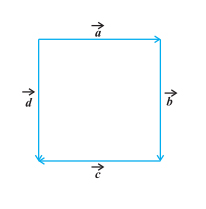 Question 2: What is the formula for vector?

Question 3: What is a negative vector?

Question 4: Is acceleration a vector?

Answer: Yes, acceleration is a vector quantity because it has both direction and magnitude. Furthermore, a negative acceleration means that the object is slowing down. And it occurs in the opposite direction as the movement of the object.

Answer: These are those vectors that have the same or parallel support. In addition, they can have equal or unequal magnitudes and their directions can be opposite or same. Most importantly, two vectors are collinear if they have the same direction or are parallel or anti-parallel.