While studying mathematics and sciences, we come across two types of quantities – scalars and vectors. The quantity that involves only value or magnitude is a Scalar quantity, like length, mass, speed, area, etc. On the other hand, the quantity that involves more than one values is a Vector quantity, like displacement, velocity, acceleration, force, weight, momentum, etc. In this article, we will look at the vector meaning by understanding the basic components of a vector.

Look at the three images given below:

The distance between initial and terminal points of a vector is called the magnitude (or length) of the vector, denoted as |\( \vec{AB} \)|, or |\( \vec{a} \)|, or a. The arrow indicates the direction of the vector.

Now, look at the following diagram 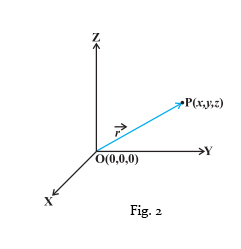 Next, take a look at the figure below 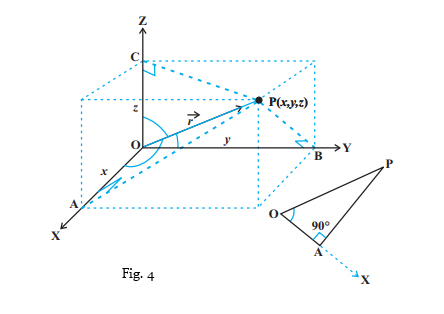 Another thing that you may note from Fig. 4, is that the triangle OAP is a right-angled triangle. Hence, we have

where r stands for |\( \vec{r} \)|. Similarly, from the right-angled triangles OBP and OCP, we have

Therefore, the coordinates of the point P can be expressed as (lr, mr, nr). These numbers, lr, mr and nr, are proportional to the direction cosines of the vector \( \vec{r} \). They are called direction ratios of the \( \vec{r} \) and are represented as a, b, and c respectively.

Question 1: Classify the following measures as scalars and vectors.

Question 2: how to define a vector?

Answer:Vector refers to an object that has both a direction and a magnitude. We can represent it as a fixed-line segment, whose length is the magnitude of the vector and with an arrow indicating the direction. In addition, the direction of the vector is from its tail to its head.

Question 3: What is the starting point of a vector?

Answer: We always represents a vector by an arrow when a line segment represents it. Furthermore, the starting point of a vector is known as the initial point and the endpoint is known as terminal point.

Question 4: Is the position a vector?

Question 5: what is a negative vector?