Air and liquids are fluids because they move and their movement is flow. Moreover, in this topic, we will examine a property of fluid flow known as the Reynolds number and then look into the Reynolds Number Formula. Also, its value will determine whether the fluid is turbulent or laminar.

It refers to the ratio of the inertia force of a fluid’s with its viscous force. Besides, inertia force is the force of momentum of the mass of the flowing fluid. In simple words, it is the measure of how difficult it would be to change the velocity of a flowing fluid.

On the other hand, the viscous force is the force that deals with the friction of the flowing fluid. For example, pouring a cup of tea vs. pouring cooking oil. Furthermore, cooking oil has a higher viscosity because it is more resistant to flow.

Besides, the inertial force and viscous force are quite similar. Moreover, they have the same unit that means Reynolds number is unitless. Furthermore, we can conclude whether the flowing fluid is turbulent or laminar based on Reynolds Number.

Most noteworthy, if Reynolds number is less than 2,300 then it has a laminar flow. On the other hand, if it is more than 4,000 then it indicates turbulent flow. Besides, the values in between 2,300 to 4,000 indicate transient flow that means the fluid flow is transitioning between the laminar and turbulent flow.

Besides, it takes place for a short period of time at the beginning or end of fluids flow. 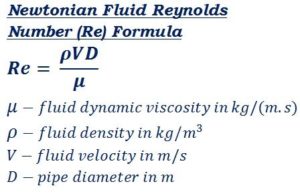 R = refers to the Reynolds Number that is unitless

Q. Let’s assume that we are doing a research project on water flowing through pipes. We also want to compare the diameters of the two pipes exhibiting laminar flow in which water flows smoothly in a conventional fashion.

In addition, pipes that show turbulent flow where water flow chaotically, that make forecasts involving its flow difficult. Furthermore, it can cause vibration that can cause premature wear and tear in the flow system causing its failure.

In our research project, we want Reynolds number of 2200 for the water flowing through the two separate pipes. In this, the first pipe has a diameter of 2.75 cm (0.0275 m). Also, the density of water is 1,000 Kg/m3. Above all, the viscosity of water is 0.0013 kg/(m⋅ s). Calculate what velocity the water has to pass through the pipe to fit these parameters?

Now, we have to use different pipe of different diameters with the same setup, also calculate the velocity of the water that should pass through it. Moreover, we will put a dye in flowing water when it is flowing through the pipe at a calculated velocity.

Also, if the dye water comes out displaying laminar flow then we just show how dynamic similitude works. Now, let’s do the final calculation to determine the velocity of the water that should flow through a smaller pipe.