We all are very familiar with power. Also, it helps us to measure the energy that we use to do the work. In this topic, we will discuss what is power and what is Power formula, its derivation and solved examples. 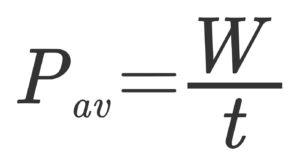 Although, both of them do the same work but the rock climber might take more time than the trail hiker. Also, the quantity that has something to do with the rate at which a certain amount of work is done is called power. Besides, in the above case, the hiker has greater power rating than the rock climber.

We can refer to power as the rate at which we do work. Also, it is the ratio of work and time. Besides, we calculate it mathematically using this formula or equation.

Moreover, the standard unit of measuring power is Watt. According to the power formula, a unit of power is equal to a unit of work divided by a unit of time. Also, a watt is equal to Joule/ second.

Besides, due to historical reasons, power is occasionally used to describe the power delivered by a machine. In addition, one horsepower equals 750 Watt.

Here the point is that for some amount of work, power and time are inversely proportional. Moreover, it means that a more powerful engine can do the same work in less time.

Suppose that Mr. X elevates his body of 80 kg up by a 2.0-meter stairwell in 1.8 seconds. Also, in this case, then we could calculate Mr. X power rating. Besides, we must assume that Mr. X must apply an 800 Newton downward force upon the stairs to elevate his body. In addition, by doing this the stairs would push upward on Mr. X body with just enough force to lift his body up the stairs.

Besides, we can assume that the angle between the force of the stairs on Mr. X and Mr. X’s displacement is 0 degrees. Then power can be resolute as shown below:

Solution: For calculating work first find the work done by the person which is equal to the potential energy at that height