Everybody knows about velocity but there is a misconception about it. The misconception is that speed and velocity are the same things but in reality, it is just the opposite. Besides, most of the people consider them the same and use them interchangeably. Moreover, they are quite similar but they are not same. Besides, in this topic, we will talk about formula for velocity.

It refers to the rate of change in displacement with respect to time. Furthermore, distance and displacement are the key points of the velocity. Also, if there is no displacement in objects potion and the object do not cover any distance then there will be no velocity. 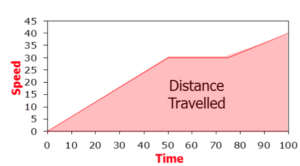 Now let’s look at the formula of velocity. As discussed earlier, velocity is a change in objects displacement over time. In simple words, velocity is a measure of how much time an object takes to reach a destination with direction. Moreover, it is directly related to displacement and inversely relates to the time traveled. Also, its unit is meter per second (m/s).

Time = taken to cover the distance.

Now let’s take some values to understand the formula clearly. Suppose Mr. X initial position is ai and his final position is af and he has taken t time to cover this distance then the equation will be.

v = velocity which is m/s (meter per second)

Now let’s test the equation with the help of examples.

Example 1- Suppose there is an object traveled a distance of 10 meters in the left direction and the time taken by the object is 2 minutes. Find the velocity of the object.

Now recall the formula which is velocity = displacement ÷ time

Now put the values in the formula. But first of all change minutes into time by multiplying minutes by 60.

Now recall the formula which is velocity = displacement ÷ time

Now put the value in the formula