Formally, we may terminate this constellation as the group of stars which appears to form the pattern or picture. These patterns are like Orion the Great Hunter. Some other patterns are Leo the Lion, or Taurus the Bull. This article will give the necessary details of these Constellations in a simple manner. 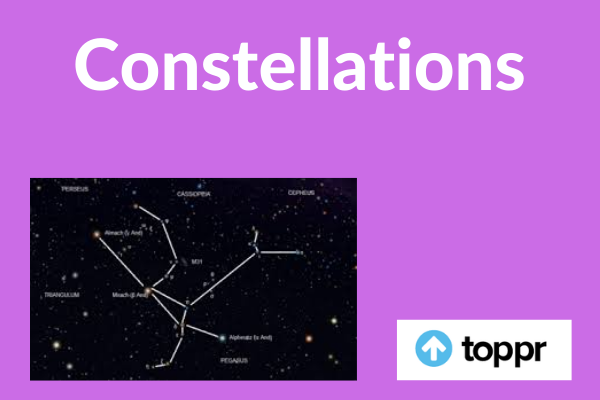 Introduction to the Constellations

Constellations are the easily recognizable sky patterns, which help the people orient themselves using the sky at night. There are officially called constellations. This name was given on the basis of the patterns of stars in the night sky, which we may see. Stella is the Latin word for the star and also a constellation is the grouping of stars. Generally, the stars in such groups are not close to each other in space. Therefore, these just appear to be close when seen from the Earth.

From before the recorded time, ancient people have developed the attributed designs and objects in the stars. They gave the name them after the various animals, objects, and heroes, and villains of mythology.  Ancient cuneiform texts and artefacts were covering roughly 6000 years’ time. They demonstrate that civilizations even then attempted to catalogue the stars for religious and practical reasons.

The oldest known drawings of the modern constellations are found on the artefacts, vases, and games from the Sumerians. These were, indicating that patterns in stars were a part of the everyday culture as early as 4000 BC. We may take an example as during the Fall/Winter constellation, Aquarius was named by the Sumerians after their God of heaven “An”. The Egyptian hieroglyph for water is the same as the symbol for the Aquarius.

History about the Constellations

By far the most according to star catalogue from the ancient times which belongs to the Ptolemy of Alexandria. He catalogued 48 constellations during the time period of 2nd century A.D. He did this into a compendium translated as the Almagest.  Further, the  Babylonians knew the division of the zodiac into 12 signs around 450 BC. Probably it may even as far back as a millennium before the Christian era.  Many of the northern constellations are known at present time too. These are minutely different from those known by the ancient Egyptians, Greeks, and Romans.

Homer also mentions many such constellations in his writings. Also, the Greek poet Aratus of Soli gave a description in the prose of 44 constellations in the Phaenomena.  The Greek astronomer and mathematician Claudius Ptolemy had described and also named the 48 constellations in the Almagest during A.D. 140. Out of these 47 are popular today by the same name with virtually the same star patterns. Other cultures have also assigned the names to the groups of stars. Due to many other reasons most of these assignments have not been internationally recognized.

Usually, the star patterns are having the little resemblance to the actual object for which they are named.  The ancient designers undoubtedly meant for these symbolic representations of their favorite legend, myth, or story.  It will be for identifying many of the constellations both challenging and fun.  The best way to find out the constellations is to start with the dark moonless sky. Fortunately, the brighter stars in the constellation mainly define these constellation patterns.

At present, 88 constellations are officially recognized which will cover the entire sky in the northern and southern hemispheres. Currently, the constellations are representing the 19 land animals and 14 men or women. Also. It includes 10 water creatures, 9 birds, two insects, two centaurs, one head of hair with 29 inanimate objects.  Some of these constellations include more than one creature.  The constellations are not actually defining the shape that they represent. But, rather, the grouping of stars in delimited to the regions of the sky. Also, out of these 88 constellations, only about 60 are completely visible, at one time of the year or another time.

Origin of the Constellations

Many people throughout civilization have identified the various patterns in the stars. For example, the constellation which we call Orion the Hunter was visible with different shapes to the different people around the world. Such as in China it is like Shen, the supreme warrior. From Egypt, it is Orion or Osiris in Ancient Egyptian.

In India as Skanda, which is a celestial General riding a peacock. From the time when people first observed the Earth, great significance has been given to the celestial objects. Throughout our human history and across many different cultures, names and mythical stories attribute to the star patterns. These are easily remembered and recognized and hence giving birth to what we know as constellations.

Constellations were in use by the common people for many practical reasons. For example, in agriculture, constellations could help to determine when the seasons were coming before the birth of new calendars. Constellations are very helpful as the navigators and explorers to find their way across the planet. Such activities fastened the discovery of new constellations further. Astronomers are using the names of constellations to explain the celestial objects in the sky.

Solution: Orion is the constellation that has the shape of a man. It comprises of 7 main stars. It can be seen and drawn since prehistoric times. This name ‘Orion’ derives from Greek mythology. Orion was the gigantic, supernaturally strong hunter of ancient times.

Q.2: How are the astronomers calculating the distance to a star?

Solution: Astronomers had developed the two methods for determining the distance of a star. The first method is the parallax using the triangulation. Astronomers are observing the position of a star on one day from one position, and again six months later from another position. They can see the angle formed between the star and the Sun. Since the diameter of the Earth’s orbit around the Sun is approximately 300 million kilometres. So, using this, with the help of trigonometry they calculated the distance. This technique works for the stars within the range of about 400 light-years of Earth.

Q.3: Give some types of the constellation.

Solution: Some main and popular types of constellation are as the following:

Share with friends
Previous
Density of Water
Next
Moon