The Radius of the Earth

If we talk about the earth then we can say that Earth is the nearly spherical ball and the only known planet of the solar system on which life exists. In addition, Earth is not completely round and it’s in the shape of an orange. In this topic, we are going to discuss the various things that help us to find the radius of the earth.

The Earth is the third planet of our solar system and galaxy known as Milky Way. Furthermore, it is the only known planet where life exists. Also, the earth provides a protective environment for living things. So, they can exist in this suitable environment.

Besides, the distance between the sun and the earth is also a factor that supports life on earth. 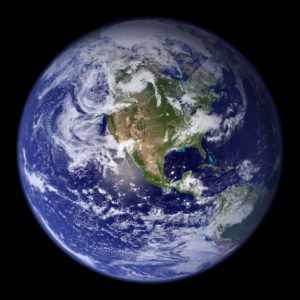 What is the Radius of the Earth?

If we talk about the appearance of the earth from the outer space then we see a blue planet with white whirls and areas of yellow, green, brown, and white.

In addition, the blue area is water (oceans and seas), the white whirls are clouds and yellow, brown, and green are landforms.

Besides, the white area is the snow caps or north and south poles (Antarctica and Arctic). Also, the equator is the imaginary line that divides the earth into two equal halves.

How to Find the Radius of the Earth?

In addition, he was able to determine the circumference of the earth because he knew the distance between the two locations (Syene {present day Aswan, Egypt} and Alexandria). Furthermore, with the circumference, he drives the diameter and radius.

For measuring the radius of the earth compute the circumference of the earth. Do this by taking the example of Eratosthenes and find the distance and angle between two locations.

So the radius of the earth will be

Question. Which of the following is not required to find the radius of the earth?

A. The distance of two location
B. Pie (π)
C. Circumference
D. length of the radius

Answer. The correct answer is option A. Because the distance between two locations relates to the circumference of the circle.

Share with friends
Previous
Why is Sea Water Salty?
Next
7 Continents of World and Where are They Located?