Aside from our sun, the dots of light we see in the sky are all light-years from Earth. Massive stars transform into supernovae, neutron stars and black holes while average stars just like the sun, end life as a white dwarf star surrounded by a disappearing nebula. All-stars, regardless of their size, follow an equivalent 7 stage cycle, they begin as a gas cloud and end as a star remnant. In this article, we shall study the Life cycle of stars in detail. 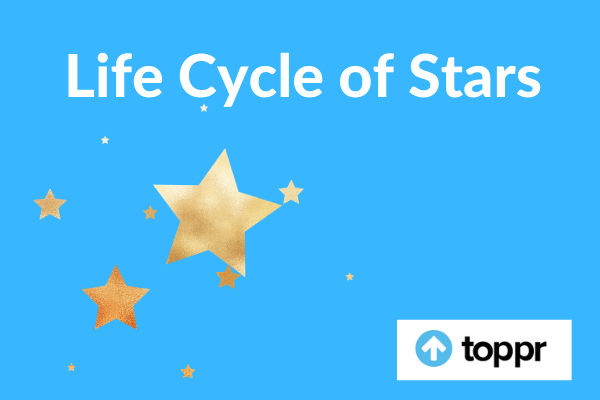 Stars are an outsized ball of plasma that doubtless fills the space around them with heat and lightweight. Moreover, they came during a sort of masses, and their mass decides how hot the star will burn and the way they’re going to die.

Also, heavy stars become a star, black holes, and supernovae. On the other hand, average stars like the sun end their life as white dwarf surrounded by disappearing planetary nebula. The fusion of Heavier Elements continues till iron starts appearing within the core. If the star is very large enough then the implosion creates supernova while small stars like sun contracts into white dwarfs whereas their outer shell radiate away as planetary nebulae.

Stages of the Life cycle of Stars

The life cycle of a star begins as an outsized gas cloud. Besides, some molecules like hydrogen illuminate and permit astronomers to ascertain them in space. Moreover, the Orion Cloud Complex of the Orion System is often the closest samples of the star during this stage of life.

It is a lifecycle of stars that forms when gas particles within the molecular cloud run into one another, and that they create heat. Furthermore, this enables a warm clump of molecules to make within the gas cloud. Besides, this clump is well-known as Protostar.

While protostars are warmer than other materials within the molecular cloud in order that they are often seen with infrared vision. Additionally, counting on their size there are often several protostars in one cloud.

Majorly this phase of the lifecycle of stars spends 90% of its life during this stage fusing with hydrogen molecule and forming helium. Most noteworthy, the sun is currently during this stage.

This continues till iron starts appearing within the core. If the lifecycle of a star is very large enough then the implosion creates supernova. While small stars like sun contracts into white dwarfs whereas their outer shell radiate away as planetary nebulae.

Supernova explosion is that the biggest events within the universe. Further, most of the fabric blows away but the core implodes rapidly into a star or a singularity referred to as a region. Moreover, astronomer’s suspects some red dwarf star are in their main sequence since shortly after explosion .

So a star is born when a massive amount of gases, mainly Hydrogen gets to accumulate at one place and therefore the molecules start to collapse in on itself thanks to the gravitational pull. The gas heats up thanks to the repetitive collision of atoms at enormous speeds. Atoms continue to heat up, make up heavier gases like Helium in the middle before they really explode almost like a reaction that of exploding Hydrogen bombs. The repulsion in the lifecycle of stars thanks to the pressure gets balanced by the attractive gravity. during this way, the star continues to burn, stabilize and shine for millions and other tens and thousands and many many years. So this is often how we believe that each one-star rise to their active lives.

Our own closest star, Sun is believed to be in a stable state for a few 4.5 thousand million years. Also, it’ll remain active for nearly as long as it has been. We know this process as the youth period of the star’s life.

FAQs  about the Life Cycle of Stars

Q.1. Do stars have their own light?

Q.2. Which is the closest star?

Ans. Sun is the closest star. It is basically said to be a star as it has the light owning property of a star. Also, it has its own bright and shining light which even the human eye cannot bear in terms of direct vision.