According to Hubble’s law, the velocity of the galaxy happens to be directly proportional to its distance. Furthermore, Hubble’s law is studied in physical cosmology and is also known as Hubble-Lemaitre law. The universe can expand and fulfil the cosmological principle only because of Hubble’s law.

Hubble’s law, simply speaking, is the observation in physical cosmology that the movement of galaxies takes place away from the Earth at speeds that are proportional to their distance. In other words, the farther a galaxy is, the faster it would move away from Earth. Furthermore, the determination of the velocity of the galaxies takes place by their redshift, a shift of the light emitted toward the spectrum’s red end.

Experts consider the Hubble’s law as the first observational basis for the expansion of the universe. Currently, it serves as one of the pieces of evidence that experts cite most often in support of the Big Bang model. Furthermore, Hubble’s flow refers to the motion of astronomical objects that take place solely due to this expansion. 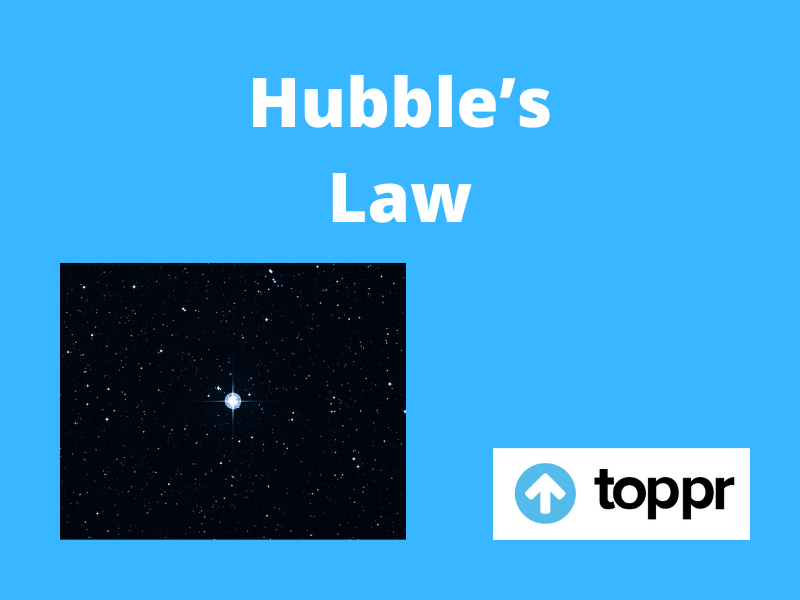 The significance of Hubble’s law is that its discovery has opened up remarkable research in various areas, like the evolution and properties of galaxies and quasars, the evolution of the universe as a whole, and the large-scale structure of the universe. Furthermore, experts can undertake the crucial determination of Hubble distances to galaxies and quasars by making use of Hubble’s Law.

The derivation of Hubble distances takes place from Hubble’s Law by making use of the observed velocity of the object. Furthermore, these distances are representative of the true cosmic distance along with a small peculiar motion component. In turn, these distances facilitate the determination of the 3D location and distribution of a massive number of quasars and galaxies from their observed spectroscopic Doppler shift (redshift) velocities that are obtainable from large redshift surveys of galaxies.

Such surveys reveal a remarkable interconnection between the large-scale network of galaxies, voids and filaments. Furthermore, routine use of Hubble distances takes place in astronomy to carry out measurement of the distances to galaxies from their (relatively) easily measured spectroscopic redshifts. This measurement can even take place from their photometric redshifts.

The evolution of galaxies and quasars from the young ∼1-billion-year-old universe till today is due to the measurement of these distances. Furthermore, an accurate determination of the age of the universe is also possible from the Hubble constant that is precisely measured.

This age is consistent in a nice manner with the age of the oldest stars. Furthermore, this was a brief insight into the all-encompassing applications of Hubble’s discovery.

When experts determine the shift in observed light into redshift in the spectrum, they can determine the distance of the galaxy from Earth by making use of Hubble’s equation after carrying out the measurement of the recession velocity. Following are some of the limitations of Hubble’s law which pose various challenges:

Hubble’s law formula is provided below in the following table:

Question 1: What is meant by Hubble constant?

Answer 1: Experts define Hubble constant as the unit of measurement, which helps in describing the universe’s expansion. Furthermore, Hubble’s constant H happens to be 160 km/s per million-light-years.

Answer 2: Redshift refers to the phenomenon in which the increase of an object’s wavelength takes place because of electromagnetic radiation. Furthermore, blueshift is the opposite of redshift where the increase in energy takes place due to shorter wavelengths that are called negative redshift. The main reasons for Hubble’s law redshift are below: