What is a Generator?

A generator operates with a reversed flow of power, converting mechanical energy into electrical energy.

Difference Between Motor and Generator 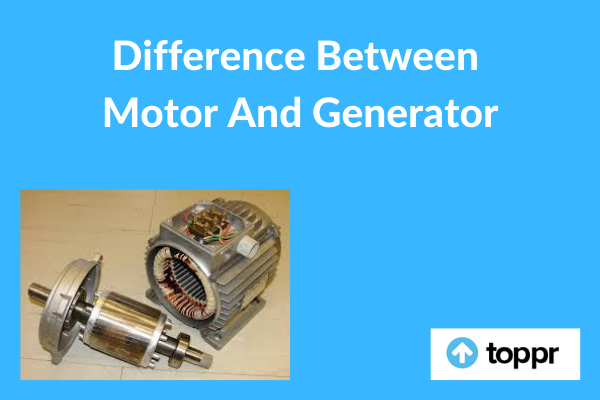 The important difference between motor and generator

After learning about the difference between motor and generator, it is important to know the details of voltage and current thoroughly.

Motor functions by the coordination between the motor’s magnetic field and electric current in a wire winding to generate force in the form of torque applied on the motor’s shaft.

An electric motor works on a continuous rotation, or for linear movement over a significant distance compared to its size. It operates on three different physical principles: magnetism, electrostatics, and piezoelectricity.

It simply converts the alternating current into mechanical power. We further classify it into three types; they are the induction motor, synchronous motor, the linear motor.

– on the basis of the rotor, the Squirrel Cage Rotor, and Phase Wound Rotor.

– on the basis of phase, Single phase induction motor, and Three-phase Induction Motor.

3) Synchronous Motor, which is further classified as:

It converts DC electrical power into mechanical power. It is divided into 2 major types

2) Self-Excited Motor- This is further classified as;

1) Dynamos generate a pulsing direct current through the use of a commutator.

A dynamo uses commutators to produce direct current. It is self-excited.

1) One such type is the Homopolar generator. This is a DC electrical generator consisting of an electrically conductive disc or cylinder rotating in a plane perpendicular to a uniform static magnetic field.

2) Another one is (MHD) generator. It directly extracts electric power from moving hot gases through a magnetic field, without the use of rotating electromagnetic machinery.

1) The induction generator mechanically turns their rotor faster than the synchronous speed, giving a negative slip.

2) Linear electric generator- In this form, a sliding magnet moves back and forth through a solenoid – a spool of copper wire, which in turn induces an alternating current into the loops of wire.

3) Variable-speed constant-frequency generators- These generators are in use to harvest natural sources of mechanical energy (wind, tides, etc.) to produce electricity.

FAQs about Motor and Generator:

Q.1. Is it possible to run an electric motor as a generator in reverse?

Ans- Yes practically any type of motor can also serve as a generator. For example, a DC motor when runs in reverse supply current form the positive terminal. Similarly, asynchronous motor (including permanent magnet) produces power if run by an engine.

Q.2. Why generator efficiency is more than motor?