Mirrors are smooth, polished or shining surfaces. They reflect the light beam and create images. Thus, there are two kinds of mirrors, plane and spherical mirrors. Further, spherical mirrors divide into convex and concave mirrors. It is important to know the difference between concave and convex mirror to get a clear understanding. Basically, the reflecting surface of the convex mirror bulges outside while the concave mirror bulges inwards. The major difference is the image that forms in these two mirrors. In other words, diminished images form in convex mirrors while enlarged images form in concave mirrors.

Concave mirrors are converging mirrors. The parallel incident rays fall on the mirror’s surface and the rays reflect and meet at a certain point known as the focal point. A concave mirror’s shape is similar to a spoon. When we place this mirror too close to an object, we get a magnified and virtual image. However, when there is an increase in the distance between the object and the mirror, the size of the image will reduce thereby creating a real image. Thus, the image which forms may be large or small, real or virtual.

Convex mirrors are diverging mirrors. In these, the incident ray which emerges from the same point reflects off and moves in a different direction. As a result, the light rays do not intersect on the mirror’s object side and create the virtual image of the real object. You can call it a kind of spherical mirror in which the reflective surface curves outwards. It will create a virtual image after it reflects from the mirror, the ray of lights will meet at an exact point. Moreover, the image which forms is erect, diminished and concerns the object.

Difference between Concave And Convex Mirror 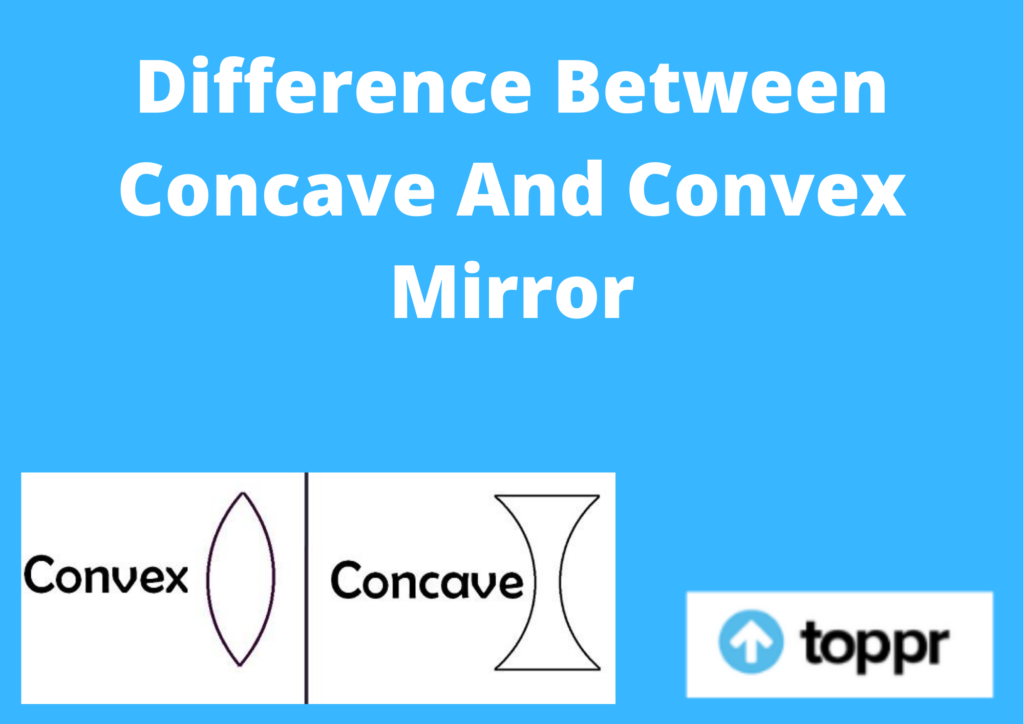 Difference between Concave And Convex Mirror

It is important to note that the reflecting surface of a concave mirror bends inward to focus, explicitly, away from the light source. When the light bounces by the curve up to a specific area, it creates an image.

These are called diverging mirrors because it makes rays diverge upon reflection. Thus, when a beam of light is directed on it, it will make the initially parallel rays, making up the beam, diverge after striking its reflective surface.

Thus, because of its wider fields of view compared to other reflective surfaces, we use them mostly in automobile side mirrors. It allows you to see more of your rear. It also serves as a good security device. For instance, they are the ones store owners install in their shops that are large disk-like reflective surfaces.

FAQs about Concave And Convex Mirror

Question 1: What is the difference between concave and convex mirrors in terms of type?

Question 2: Which mirror is used in headlights, searchlights and projectors?

Answer 2: Concave mirrors are used in headlights, searchlights and projectors as they give a magnified image of the objects.

Question 3: What is the difference between concave and convex mirrors in terms of physical appearance?

Question 4. What is the difference between concave and convex mirrors in terms of focus length?

Question 5. Can you tell the difference between concave and convex mirrors without touching them?

Answer: Concave mirrors can be found in torch lights and automotive headlights. Convex mirrors include magnifying glasses and telescopes.

Question 7. Is centre of curvature component of a mirror?

Answer: The centre of curvature is not a component of the mirror, but rather exists outside of it. Concave and convex mirrors may be made from a single spherical glass by splitting it and polishing both pieces in opposite directions.