Differences between LCD and LED 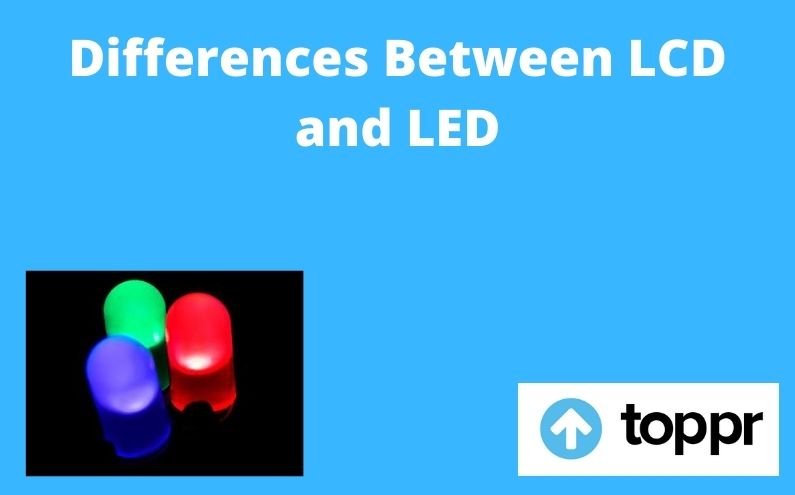 Important differences between LCD and LED are below

Liquid crystal display(LCD) has several layers that have electrodes and two polarized panel filters. Furthermore, the use of LCD technology takes place for displaying the image in electronic devices like computers etc. Moreover, the projection of light is from a lens on a layer of liquid crystal.

The combination of a grayscale image with colour light results in the formation of the colour image. Afterwards, the display of such an image takes place on the screen. An LCD is made from a passive display grid or an active matrix display grid. The LCD smartphones consist of the active-matrix display.

The LED is a PN-junction diode that tends to emit light when the passing of electric current takes place through it in a forward direction. Furthermore, a charge carrier recombination happens in LED.

A combination of electrons belonging to N-side and P-side takes place in LED. Due to this, the formation of energy takes place in the form of heat and light. The LED comprises semiconductor material that is certainly colourless, and the radiation of light happens through the diode’s junction.

FAQs about LCD and LED

Question no 1: Explain the difference between LCD and LED in computer graphics?

Answer 1: The difference LCD and LED in computer graphics is that LED offers far more superior graphics in comparison to LCD. This is because; LED uses PN-Junction diode which significantly enhances computer graphics. In contrast, LCD uses liquid plasma or crystal for light emission.

Question 2: Differentiate between LCD and LED in terms of the response time?

Answer 2: When it comes to response time, LED is certainly faster on comparing it with LCD