Parallel Plate Capacitors are the type of capacitors which that have an arrangement of electrodes and insulating material (dielectric). The two conducting plates act as electrodes. There is a dielectric between them. This acts as a separator for the plates. The Principle of Parallel Plate Capacitor

We know that we can give a certain amount of charge to a plate. If we supply more charge, the potential increases and it could lead to a leakage in the charge. If we get another plate and place it next to this positively charged plate, then negative charge flows towards the side of this plate which is closer to the positively charged plate.

Dependence of Charge Stored in a Capacitor

The amount of electric charge stored in any of the plates of parallel plate capacitor is directly proportional to the potential difference between the two plates of Parallel Plate Capacitor. This relation can be seen as:

Where C = Capacitance of the capacitor; Q = Amount of charge stored in one capacitor; V = Potential difference between the two plates.

The Capacitance of Parallel Plate Capacitor

According to the Gauss law, we can write the electric field as:

When the plates are placed very close and the area of plates are large, we get the maximum capacitance.

On the two plates, the microscopic dipole moment of the material will shield the charges. Thus, it will alter the effect of dielectric material, inserted between the two plates. Materials have a permeability which is given by the relative permeability k. The capacitance is thus:

We can increase the capacitance of a parallel plate capacitor by introducing a dielectric between the plates as the dielectric have permeability k, which is greater than 1. K is also sometimes known as Dielectric Constant. 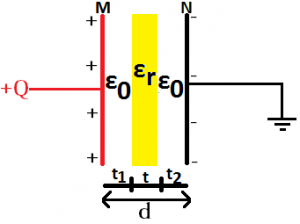 Let us assume that a capacitor has capacitance C and have electric charge Q and the capacitor is electrically neutral. Q1: Assertion: The total charge stored in a capacitor is zero.
Reason: The field just outside the capacitor is σ/ε0. (σ is the charge density)