Can we collect charges? What happens when stationary charges start accumulating in a region? Yes, by generators! However, that is not all! Generators have a lot of story to them. In this chapter, we will learn about a specific type of generator, the Van De Graaff Generator, and its working principle.

Table of content
1 Suggested Videos
2 The Van De Graaff Generator
2.1 Browse more Topics under Electrostatic Potential And Capacitance
3 Working Principle of The Generator
4 The Accumulation of Charge
5 Solved Example for You

A Van de Graaff generator is an electrostatic generator. American physicist, Robert J. Van de Graaff was the person behind this invention. It uses a moving belt that accumulates charge on a hollow metal structure. This structure has a design of a globe, placed on the top of a column that is insulating in nature.

Thus, it creates a very high electric potential in the order of a few million volts.  This results in a very large electric field. We use this electric field to accelerate charged particles.

Working Principle of The Generator

Let us place a small sphere at the center of the large one such that the radius of the smaller sphere is r and the charge over its surface is q. At the surface of the small sphere:

At the large spherical shell of radius R:

If we consider the total charges in the system, that is, q and Q, then the total potential energy due to the system of charges is: 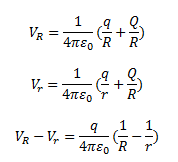 The Accumulation of Charge

Assuming that q is positive, the inner sphere is always at a higher potential and is independent of the charge Q that is accumulated on the larger surface. The difference in potential given by the value V(r) – V(R) is positive. The potential due to Q is constant up to radius R and thus, the difference gets canceled out.

Similarly, the potential at the larger sphere would also keep rising as the charge increases, until the breakdown field of air is reached.  The Van de Graaff generator works on the same principle. 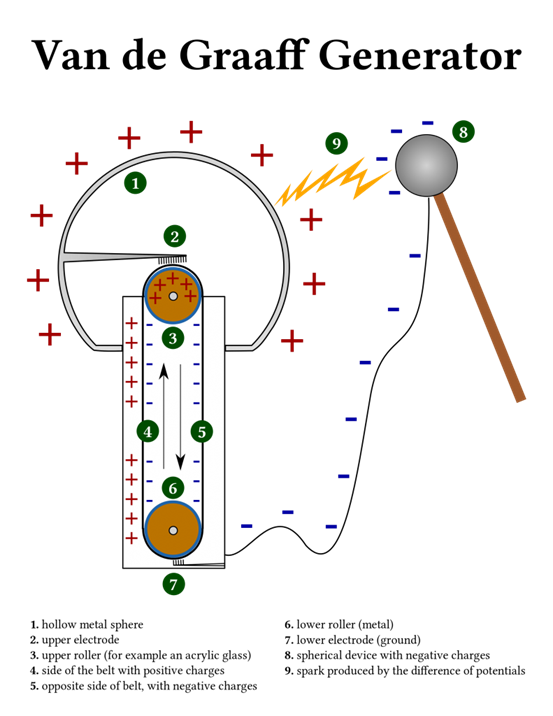 In the figure given above, we can see a Van de Graaff generator. Here, a large spherical shell is at a height of several meters above the ground. An insulating column holds it. Two pulleys are wound with a belt-like insulating material, with one being at ground level and the other one at the center of the shell.

This belt undertakes a continuous motion, thus carrying a positive charge continuously from the ground to the top. This belt is kept moving continuously by a motor driving the lower pulley. The positive charge is transferred to the larger shell by a carbon brush, thus rendering the outer shell with a very high potential over the time.

Q: An efficient Van de Graff generator has a rounded terminal as it:

Solution: A) The whole purpose of the generator is to retain charge and create a region of a high potential. To prevent leakage of charge through corona discharge or other such phenomena, we have to avoid using spikey or narrow conductors. As a result, the terminals are rounded.