Lightning causes thunder, a sound from the blast wave which develops as gases within the vicinity of the discharge experience an explosion in pressure. Lightning usually happens during thunderstorms and other kinds of energetic weather systems. In the case of volcanic lightning, it may also occur during volcanic eruptions. Let us study in detail. 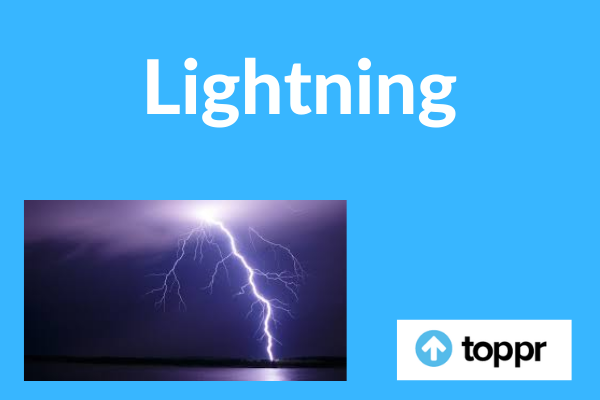 Lightning happens due to the presence of electrostatic discharge. It happens during when two electrically charged regions within the atmosphere or ground temporarily equalize themselves, causing the instantaneous release of the utmost amount together gigajoule of energy. This discharge may produce an honest range of electromagnetic radiation, from extremely popular plasma created by the rapid movement of electrons to brilliant flashes of sunshine within the form of black-body radiation.

In this CG process, lightning discharge occurs between a thundercloud and the ground. It is initiated by a stepped leader moving down from the cloud, which is met by a streamer moving up from the bottom. Cloud-to-ground (CG) lightning is either positive or negative, as defined by the direction of the normal current between cloud and ground. Most CG lightning is negative. It means that a charge transfers to ground and electrons travel downward along the lightning channel. Conventionally the present flows from the bottom to the cloud. During a positive CG flash, the reverse case happens, where electrons travel upward along the lightning channel and a charge transfers to the bottom. Conventionally the present flows from the cloud to the ground.

Cloud–cloud lightning pattern is additionally said “Anvil Crawler”, due to the habit of charge, typically originating beneath or within the anvil and scrambling through the upper cloud layers of a thunderstorm, often generating dramatic multiple branch strokes. One usually sees this thunderstorm passing over the observer or begins to decay.

IC lightning most ordinarily occurs between the upper anvil portion and lower reaches of a given thunderstorm. This lightning can sometimes be observed at great distances in the dark as so-called “sheet lightning”.

kinetic theory of gases dictates when gaseous molecules undergo a rapid increase in pressure they tend to expand outward from the lightning thus creating a blast wave which we hear as thunder. Thunder occurs thanks to the electrostatic discharge of terrestrial lightning superheats the air to plasma temperatures along the length of the discharge channel during a brief duration. The origin thunder sound varies along with distances from the observer and one can hear a rolling or rumbling effect. This phenomenon happens because sound waves actually don’t propagate from a single point source but along the length of the lightning’s path. One can also see the lightning at a sufficient distance and not hear it. There is data that a lightning storm can be seen at over 160 km whereas the thunder travels about 32 km.

Lightning currents create heat waves. Thus when lightning strikes a tree, this heat may vaporize its sap, thus causing a steam explosion that bursts the trunk. Fulgurite is a type of structure which forms when lightning travels through the sandy soil. The surrounding soil plasma channel may melt, forming tubular structures. Humans or animals struck by lightning may suffer severe injury thanks to viscus and systema nervosum damage. Lightning also damages buildings and tall structures because the lightning seeks unintended paths to ground.

The very high temperatures generated by lightning cause significant local increases in ozone and oxides of nitrogen. Each lightning flash in temperate and sub-tropical areas produces 7 kg of Nitrogen oxides on average. Within the troposphere, the effect of lightning can increase Nitrogen oxides by 90% and ozone by 30%.

Answer. Strikes can also cause a brain hemorrhage or stroke, as well as tissue injuries and deep thermal burns within the body. The indirect strike also causes minor thermal burns and nervous system damage, where the body is only exposed to a fraction of the energy of the lightning.

Q.2. What attracts lightning to a person?

Answer. There are many factors that attract lightning. It includes height, pointy shape and isolation. These are the dominant factors whether lightning will strike an object including human beings. However, when thunderstorms are nearby it’s very unsafe to touch or being near any metal objects, such as a fence, metal gates.

Q.3. Is it safe to use mobile phones during lightning?

Answer. Cell phones (and cordless portable phones) in use indoors during electrical storms are perfectly safe because there is no wire through which the electric discharge could travel. The belief that lightning can follow the radio waves is still not proved.

Q.4. Can lightning strike a plane?

Answer. When lightning strikes an aircraft, it is either unharmed or sustains only minor damage. Lightning usually attracts towards a relatively sharp edge of a plane. It may be a wingtip or nose, and the current exits via the tail, according to Hansman.