Anemometer is a device useful in measuring wind speed and direction. It is also the common weather station instrument. This term is derived from the word anemos, which is of Greek origin. Its meaning is wind. It also describes any wind speed instrument useful in meteorology. An anemometer is an instrument that also measures wind pressure. It is having its important for meteorologists to study the weather patterns. They are also important for the workings of the physicists during their study of the way of movement of air.

Thus, anemometers are having a variety of uses in our day-to-day life. For weather forecasting, it is an important tool. Weather stations are measuring wind speed which helps to indicate a change in the weather patterns for meteorologists. For example, it may indicate hurricanes, storms, and tornadoes. Such information is very important for engineers, pilots, and climatologists. This article will discuss many aspects of the anemometer in a systematic way. 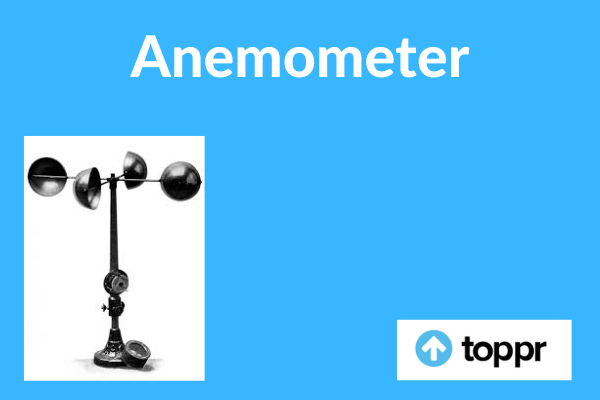 Introduction to the Anemometer

The anemometer is a mechanical instrument useful to measure the speed or velocity of air or gases. It may be either in a contained flow like airflow in a duct or in the unconfined flows like the atmospheric wind. To determine the air velocity, anemometers are able to detect the change in some physical properties of the fluid. Sometimes to measure the effect of the fluid on a mechanical device inserted into the flow. Actually, the anemometer counts the number of rotations. Further, it is useful to calculate wind speed. Many times these are also important to the work of physicists, who study the way air moves.

This device is mostly found in the weather stations. Actually, the wind is moving the air in motion and hence it is causing the difference in air pressure. In this case of traditional anemometer has four cups to measure the speed of the wind. Each of these four is attached to the horizontal arm. Obviously, the faster the wind, the faster the cups spin the axis. Its revolutions per minute will give the wind speed in rpm unit. Wind speed measurements help in weather forecasting like hurricanes, storms, and tornadoes. At the present time, modern anemometers have the unique look and even other pocket-size devices.

Mostly handheld anemometers are of waterproof quality. Some can even float and allows the user to access a variety of wind speed measurement units. Whereas digital handheld anemometers have wind meters which further may be connected to the smartphones through Bluetooth.

Other than measuring the speed of the wind by using the anemometer, some others are as follows:

Q.1: Who was the inventor of the anemometer?

Solution: Leon Battista Alberti was the inventor of the anemometer.

Q.2: Who has invented the way of measuring the wind speed?

Solution: John Thomas Romney Robinson was a scientist in the United Kingdom. He invented the way to measure wind speed. These are a vital part of weather monitoring and forecasting.

Q.3: Why is wind important for humankind?

Solution: Wind energy is the source of renewable energy. It does not contaminate and also it is inexhaustible and reduces the use of fossil fuels. These are the origin of greenhouse gasses that cause global warming. Wind energy is useful to produce electricity. Wind power is more expensive than power from old established power plants.

Solution: The cup anemometer measures the velocity in a plane perpendicular to the axis of its rotation cups. It is mostly found at the weather stations. If it is mounted with the shaft perpendicular to the horizontal, then it will measure only the component of the wind which is parallel to the ground.

Q.5: What is a Sonic anemometer?

Solution: Sound waves are useful in determining the speed of the wind. These waves are made to pass through some transducer. This concept is useful in Sonic Anemometer. It is having its applications in aircraft and scientific wind turbines.

Q.6: What is Hotwire anemometer?

Solution: It consists of a thin wire which is heated up to a certain temperature slightly more than the atmospheric temperature. The wire cools when the air flows past the wire. To calculate the velocity, we require the relation between the resistance of the wire and the velocity of the wind.