When a book is kept on the table, is anything happening there? ‘It’s just stationary’ you’d answer. And you’re right! But even in this stationary mode, the book is exerting a type of gravitational force towards the earth. Confused? Well, this is one of the applications of Newton’s first law of motion. But what are laws of motion? Let us study in-depth below.

When an object is not moving with changing speed i.e. it’s in equilibrium, the net force acting on it is ‘balanced’. For example, the weight of the apple is balanced by the force exerted by the branch on the apple, when an apple hangs from a tree. 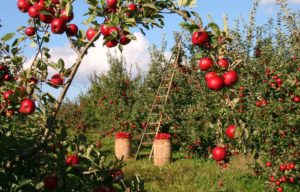 When an object is not in equilibrium i.e. moving with changing speed, the net force on it is ‘unbalanced’. For example, when an apple falls from the tree an unbalanced force equal to its weight is acting on the apple.

What are the different types of Forces?

The tendency of a body in motion continues to remain in motion, moving with uniform velocity and a body at rest continues to remain at rest unless acted upon by a force. This tendency of the body is known as ‘inertia’ (i.e. resistance to change). In Newton’s First Law of Motion, this concept is quantified. The word inertia comes from the Latin word ‘iners’, that means idle or lazy.

Inertia is a quality, all the objects/bodies in nature made of matter that possess. Mass is a measure of inertia. Objects with higher mass resist changes in motion more than objects with lower mass.

What is Newton’s Universal Law of Gravitation?

Sir Isaac Newton worked in many areas of mathematics and physics. He developed various theories of gravitation when he was only 23 years old. In around 1698, some twenty years later he presented the three laws of motion.  Newton’s laws of motion give us the relations between the forces acting on a body and the motion of the body.

These laws are as follows:

Newton’s First Law of Motion also known as Law of Inertia states that every object persists to stay in uniform motion in a straight line or in the state of rest unless an external force acts upon it.

Newton’s Second Law of Motion states that force is equal to the change in momentum per change in time. For a constant mass, force equals mass times acceleration, i.e. F = m*a. Learn about the Acceleration in detail here.

Newton’s Third Law of Motion states that for every action there is an equal and opposite reaction.

If the time interval for the applied force is increased, then the value of the applied force will decrease. In cricket players use this while catching the ball. They pull their hands back so that time of contact with ball increases and they would experience less jerk due to the motion of the ball.

From Newton’s second law of motion,

For simplicity, the constant of proportionality (k) is chosen to be 1, therefore

How to Calculate Average Velocity and Average Speed?

Applications of Laws of Motion

A car travelling on a highway at a fixed speed tends to maintain uniformity in its motion and everything else inside the car. When a force from outside is applied to the car in motion, like a sudden change in direction, the car will respond to this sudden change on its own, although the passengers in the car or the objects inside it are still responding to inertia, wherein their motion will still be in a straight line. When in fact the direction has already changed causing the passengers or the objects to be thrown off. This event is explained by the first law of motion.

The application of the second law of motion can be seen in determining the amount of force needed to make an object move or to make it stop. For example, stopping a moving ball or pushing a ball.

The application third law of motion can be seen via an illustration wherein let’s say a glass is on a table, even though the glass is at rest it is actually exerting a force on the table and the table, on the other hand, is exerting equal opposite force thus making the glass stay.

How to Calculate Uniform Circular Motion?

Q: Which of the following is/are true about force:

A. Force will always change the magnitude of velocity

B. Force will always change the direction of the velocity