When an object goes around in a circle, the description of its motion becomes interesting in many ways. To better understand the circular motion let us look at an example.

Suppose you have a ball attached to a string and you move it constantly in a circular motion. Then we observe two things: From the second point, an important result follows. Newton’s first law of motion tells us that there can be no acceleration without a net force. So there must be a force associated with the circular motion. In other words, for the circular motion to take place a net force has to act on the object. Thus, the change in direction is a result of a centripetal force.

Centripetal force is the force acting on a body in a circular path. It points towards the center around which the body is moving.

As long as the ball is attached to the string, it will continue to follow the circular path. The moment the string breaks or you let go of the string, the centripetal force stops acting and the ball flies away.

To study uniform circular motion, we define the following terms.

We saw earlier that a body moving in a circle changes its direction continuously. Therefore, we said that circular motion is an accelerated motion. From Newton’s laws, we know that a body can accelerate only when acted upon by some force.

We can also get an idea of how fast an object is moving in a circle if we know how fast the line joining the object to the center of the circle is rotating. We measure this by measuring the rate at which the angle subtended at the center changes. This quantity is ω and ω = Change in angle per unit time. Hence, ω is the Angular Speed.

The SI unit is radian / s or rad/s. For a single rotation, the change in angle is 2π and the time taken is ‘T’, therefore we can write: 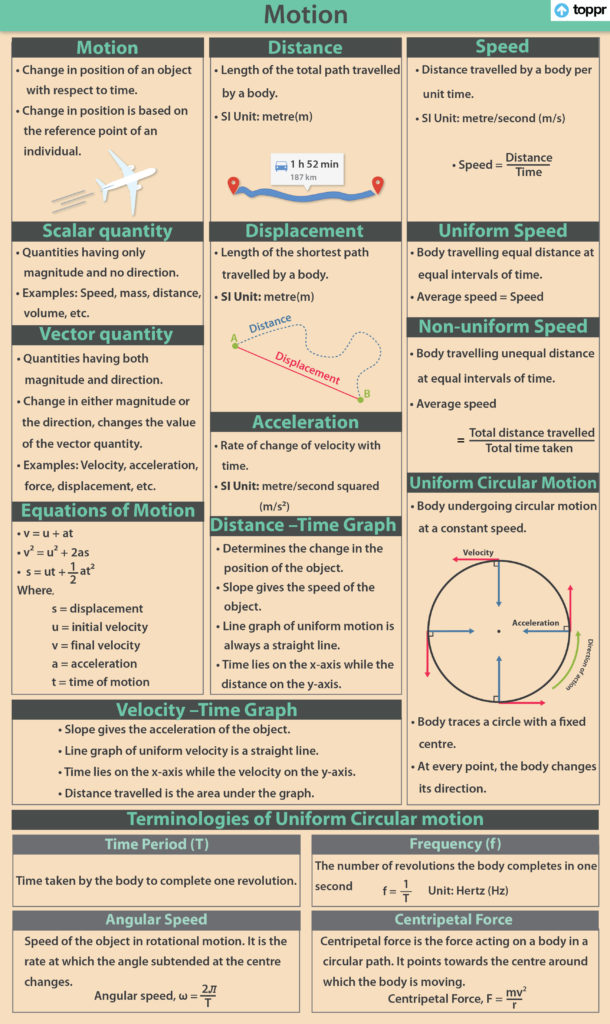 Q: A car runs at a constant speed on a circular track of radius 100 m taking 62.8 s on each lap. What are the average speed and average velocity on each complete lap? (π=3.14)

Solution: B). Even without solving the problem, a closer look will tell you that all other options may be wrong. As in a circular motion, if the particle returns to the starting position, then the displacement is 0. Thus, for such motion, the velocity is 0 and the speed is non-zero. Furthermore, the circumference of each lap is  2(3.14)(100) which is equal to 628 m. Therefore, speed after each lap is 628/62.8 which is equal to 10 m/s