Mass is a property of the physical body and, the measure of its resistance to acceleration (change in its state of motion) as net force is applied. The mass of the object, therefore, determines the strength of its gravitational attraction to other bodies. The basic SI unit of a mass is the kilogram (kg).

In physics, mass is not the same as weight, even though mass is mostly determined by calculating the weight of material using a spring scale, rather than by comparing it directly with the known masses. An object on the Moon weighs a lot lesser than it does on Earth because of its lower gravity, but it will also have the same mass. That’s because weight is a force, while mass is a property that (along with gravity) defines the strength of that force. 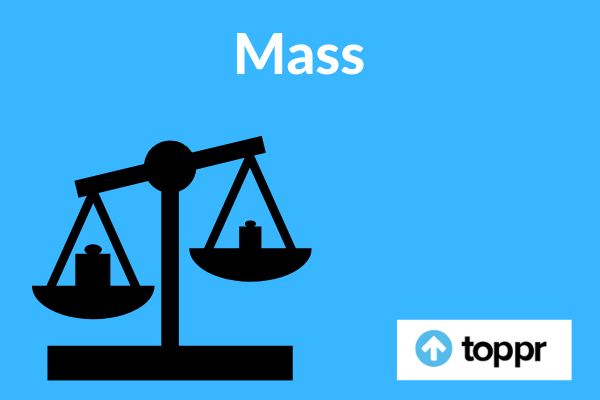 Table of content
1 What is a Mass?
1.1 What is Weight?
1.2 History
1.3 Galilean Free Fall
1.4 Newtonian Mass
1.5 Albert Einstein’s Theory of Relativity
1.6 Measurement of Mass
2 FAQs about Mass

What is a Mass?

It is among the most fundamental quantities in physics and the most basic property of matter. We may describe mass as the measure of the amount of matter in the body. SI unit of mass is in terms of kg. Mass is a fundamental property of matter. It is self-sufficient and independent of all other variables, such as temperature, pressure, and location of the object in space. Atomic mass is the mass of an atom expressed in the atomic mass unit.

The matter has mass, and it occupies space. It is everything you can physically touch, so anything you see or interact with around you has mass. The term mass is often confused with a different parameter known as weight. Apart from using normal weight balances, the mass of planets is determined using gravitational approaches. Measuring the mass of atomic particles is done using a mass spectrograph (radius of trajectory is proportional to the mass of the charged particle travelling in a uniform electrical and magnetic field).

Mass is not the same thing as weight. Weight is a measurement of the forces exerted by gravity on the body mass. Mass, is the universal value of the object, while weight is a localized understanding of the mass of an object. The weight measurement unit is force, the SI unit of which is Newton. Weight is the consequence of gravity. Hence, we describe the weight with the formula:

Where m is the mass, and g is the gravitational acceleration at that specific location.

Humans discovered in an early era that the weight of a collection of similar objects was directly proportional to the number of objects in the collection:

W is the weight of the collection of similar objects, and n represents the number of objects in the collection. Proportionality, by definition, means that two values have a constant ratio:

Galileo Galilei was not the first to explore the gravitational field of the Earth, nor was he the first to accurately describe its fundamental characteristics. Galileo relied on scientific experimentation and discovered physical principles that have a significant impact on future generations. However, it is not clear if these were hypothetical experiments intended to demonstrate a concept, or if they were real experiments carried out by Galileo, but the results of these experiments were both practical and compelling.

In 1638, Galileo observed that, in the event of an object in free fall, the distance the object has fallen is always proportional to the square of the elapsed time:

Galileo had demonstrated that objects in free fall under the influence of the Earth’s gravitational force had a steady acceleration and, Galileo’s contemporary, Johannes Kepler, had shown that planets follow the elliptical paths under the influence of the Sun’s gravitational mass. However, Galileo’s free fall motions and Kepler’s planetary motions remained distinct throughout their lifetime.

g is the acceleration of the body as it moves through a volume of space where gravitational fields exist.

and, R is the radial coordinate of the body (the distance between the centres of the two bodies).

Albert Einstein formulated his general theory of relativity, beginning with the assumption of the intentionality of correspondence between inertial and passive gravitational mass and that no experiment can ever find a difference between them, which is the equivalence principle.

Because of this force, the acceleration of the object determined by Newton’s second law:

If we put these equations together, the gravitational acceleration is:

This implies that the ratio of gravitational to inertial mass of some object is equal to some constant K if and only if all objects fall at the same rate in a given gravitational field. This concept is the “universality of free-fall”. In addition, constant K can be 1 by appropriately defining our units.

Mass measurement is mostly by balancing. We derive the value of an unknown mass in terms of a known mass value by comparing the unknown body’s mass to a known body’s mass. Balance works in space and areas with no gravity, since gravity can influence the balance of both masses.

Q.1. What are the differences between mass and weight?

Answer. The differences between the mass and weight are:

Q.2. How is weight measured?

Answer. Weight is a measurement of the forces exerted by gravity on the body mass. Mass, is the universal value of the object, while weight is a localized understanding of the mass of an object. Weight is the consequence of gravity and, hence we describe the weight with the formula of a body which has a mass ‘m’ and weight of magnitude ‘w’:

So, the weight of an object could be directly proportional to its mass.

Q.3. What is the Atomic Mass Unit?

Answer. The Atomic Mass Unit is useful when dealing with atoms and molecules whose masses are so small that the kilogramme becomes impractical. The 1/12th mass of the carbon-12 atom defines as one atomic mass unit. The value of 1 atomic mass unit shall be as \({1.66} \times {10^{-27}}\).