A colour code is a system for displaying the information by using different colours. The earliest examples of colour codes were in the use of long-distance communication. It was with the help of flags. On the forms and signage, the use of colour can distract through the black and white text there. Resistor Colour coding scheme is a similar kind of scheme. I use the coloured bands to easily identify the resistors resistive value as well its percentage tolerance. In electronics, there are many different types of Resistors available. These are useful in both electrical and electronic circuits to control the flow of current or to produce the voltage drop. Let us understand the Resistor Colour Codes in detail in this article. 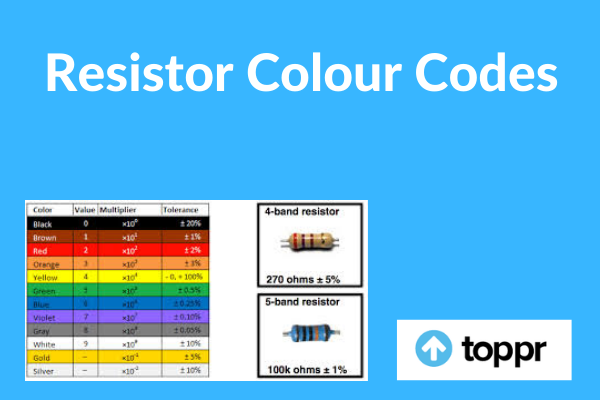 It consists of the set of individual coloured rings or bands in the spectral order, where each one is representing each digit of the value of the resistor. The resistor colour code markings are always read one band at a time conventionally in left to right manner.

The larger width tolerance band oriented to the right side indicates its tolerance value. Earlier, without the industry standards, each manufacturer was using its own unique system for colour coding or marking schemes. During the year 1920s, Radio Manufacturers Association developed the RMA resistor colour code. It was the fixed resistor colouring code marking.

Sometimes, schemes with 5 or 6 bands are needed. For the five-band colour code, the first three bands will tell about the first three digits of the resistance. The fourth band will tell that how many zeros to be added. The fifth band tells about its tolerance.

The colour code values for denoting the tolerance rating of resistors are given as:

If the resistor has no fourth tolerance band then its default tolerance will be 20%.

Resistors are the common component in the electronic circuits and devices. The main purpose of the resistor is to maintain the specified values of voltage and current in such circuit. A Resistor is mainly working on the principle of Ohm’s law. This law states that the voltage across the resistor is directly proportional to the current flowing through it. Some different kinds of resistors available in the market with the diverse rating and sizes are as follows:

These Colour Codes are useful on the resistors in carbon, carbon film and similar metal film types. These are mainly useful for electronics engineers to learn. In this four-band resistor colour code, the first three bands which are closest with each other will indicate the value in ohms. Out of these, the first two indicate two numbers. The third one is called the multiplier band and indicates the number of zeros. For example, red, red, red will indicate 2200 ohm. It is normally called as 2.2 Kilo ohm. This last version is popular in many circuit diagrams. To avoid the 2.2K being read as 22K instead of 2K2, where the decimal point will not be obvious.

The multiplier band will have some colour between black (means no zeros) and indicating a value between10 ohm. Also a value less than 100 ohms. The blue (means 6 zeros), indicates the value in the tens of millions, such as 10,000,000 ohms will be brown, black, blue.

Resistors are also available in many different versions of the Preferred Values. Some of these versions are containing a wider range of values and hence requiring the more accurate numerical values. These are closer intolerance ratings and can be achieved in the four band colour code. Thus the five band code was created to accommodate this with greater accuracy. Most type of resistors in this series is having a tolerance rating of  \pm 1% or \pm 2%.3.

These changes are in the resistance, but normally in very small value. It is measured in parts per million, for example, 50 ppm per degree Celsius. Thus, it may be calculated as 1 M \Omega resistor having a \pm 2% tolerance value for red band 5. Might be expected to change its value by the 1000  \Omega when its temperature changes by 20 degree Celsius.

Q.1. What are the different bands in the Register colour coding?

Solution: The four band colour codes are the most common in variation. These resistors are having two bands for the resistance value with one multiplier and one tolerance band. For example, on the left, these bands are green, blue, red and gold. Thus, by using these colour codes, we may find that green stands for 5 and blue for 6.

Q.2. What is the meaning of R in the resistors?

Solution: R represents the resistance of the resistor. In the ohm’s law V = IR

I is the current through the resistor in amperes (A),

R is the resistance value of the resistor measured in ohms

Q.3: How to read and determine the Resistor Value through Resistor Colour Codes?

Q.4: What type of resistor should I use in the circuit?

Solution: A rule of thumb for using the appropriate Resistor is to find the resistor having twice the power rating. Usually, we may just use the cheapest resistor which we may find with the correct power rating.