Newton’s laws of motion are always important for everyone today. These are very relevant as well as revolutionary for everyone. These three laws of motion help us to understand how objects behave with respect to motion. This article explains Newton’s third law of motion. If an object X exerts some force on object Y, then object Y will also exert a force of the same quantity but in opposite direction on the object X. This law is representing the symmetry in nature. Actually, forces always occur in form of pairs. And one object cannot exert the force on another without experiencing a force itself.

We probably know that when we throw a ball against a wall, the ball exerts a force on the wall. Similarly, the wall puts force on the ball, and due to it, the ball bounces off the wall. This type of fact is the consequence of Newton’s third law of motion. This article will give the necessary details about Newton’s third law of motion in a simple by explanatory manner. 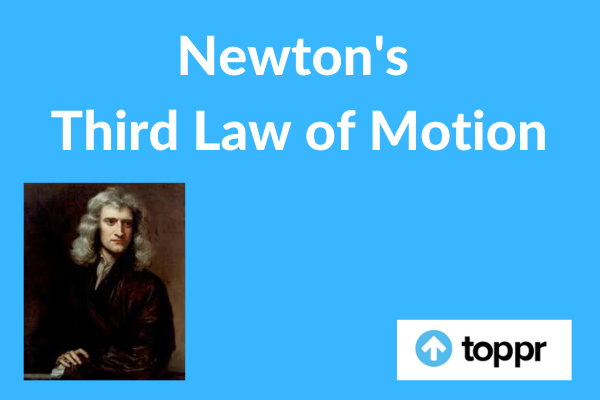 Newton’s first law of motion implies that any object cannot start, stop, or change its direction by itself. The object must require certain force from the outside world to cause such a change. Such property of massive bodies to resist any change in the state of motion is termed as inertia. Also, Newton’s second law of motion describes what happens to the massive body with the effect of an external force. This law of motion states that the force acting on anybody is equal to the product of its mass and the acceleration.

According to Newton, when two objects interact, then they can exert the force on each other. These forces are termed as action and reaction pair. According to this law, when one object exerts some force on the other object, then the first object experiences a force in equal quantity but in the opposite direction of the force. It means that in every interaction, there is a pair of forces acting on the interacting objects.

Newton’s Third Law says that, if an object X exerts a force on object Y. Then object Y must exert a force of equal quantity and opposite direction back on the object X. This law signifies a form of symmetry in nature. So, forces always occur in pairs. Any object cannot exert a force on another without having the force itself.

The mathematical representation of Newton’s third law of motion is let X be the body exerting force   on the body Y. Then body Y too exerts a force  on body X, and it is given as:

Every object in the state of uniform motion will be having its same state of motion unless an external force on it. Many of us are familiar with the fact that a rifle recoils when fired. Such recoil is the result of action-reaction force pairs. A gunpowder explosion will expand it outwards allowing the rifle to push forward on the bullet. With the consistency of Newton’s third law of motion, the bullet pushes backwards upon the rifle.

Examples of Pairs of Interaction Force

We may see the variety of action-reaction pairs easily in nature. Some of these are explained as follows:

Q.1: What is the main theme of Newton’s laws of motion all about?

Solution: Newton’s laws of motion are implying the relationship between the motion of an object and the forces acting on it. Through the first law, we come to understand that an object will not change its motion in the absence of any external force. According to the second law, the force on any object is equal to the product of mass and acceleration. The third law is saying that for every action, there is an equal and opposite reaction.

Q.2: What is the factor behind working of Newton’s third law?

Solution: This law works due to the balanced nature of the universe. If we push against something it makes no sense not for it to push back against us. Our hand pushes on the table, and hence the table pushes back just as hard against the hand.

Q.3: What is the other referring name for Newton’s third law?

Solution: We also refer to this law as the law of action-reaction. In this law, the force exerted is termed as action and the force experienced as the result of the reaction.

Q.4: How do we calculate Newton’s third law?

Solution: Mathematically, if some object exerts a force F on body B, then body B simultaneously exerts a force with −F on A. So, in vector equation form, we have

Thus, it represents a type of symmetry in nature. Also, forces always occur in the form of pair.

Q.5: Can we say that walking an example of Newton’s third law?

Solution: Yes, it is the example of Newton’s third law. When anyone walks, then the foot exerts a force on the ground. As a result, the ground exerts an equal force which points in the opposite direction. So, this force is allowing the person to move forward.