The sound is all around us and we can measure it too. Its measurement is also important for our safety, as the loud noise can actually damage our hearing capacity. Therefore, the intensity of sound is needed to be measured using some standard units. As our ear is incredibly sensitive, and we can hear everything from our fingertip brushing lightly over the skin to a loud thunderclap. If we consider the power, the sound of the thunderclap is approximately 1,000,000,000,000 times more powerful than the power of sound which is in the smallest audible range. Thus, a suitable unit for the measurement of sound is used. It is to express the ratio of one value of a power or field quantity to another on a certain logarithmic scale. This logarithmic quantity is the power level or field level. Let’s study the decibel unit in a simple manner. 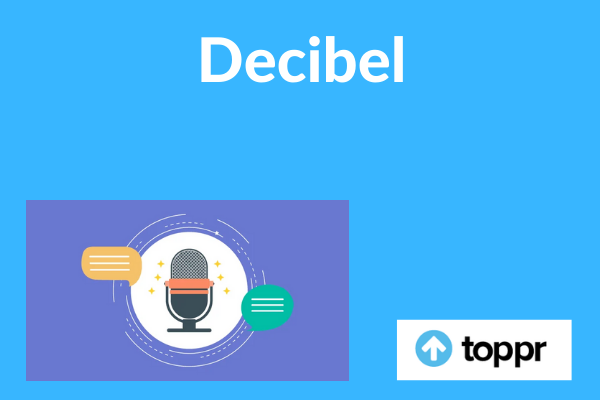 Table of content
1 Introduction of Sound as a Wave
1.1 Decibel: SI Unit of the Sound
1.2 Loudness and Pitch of Sound
1.3 Decibel Meter
2 FAQs about Decibel

Introduction of Sound as a Wave

A sound is the form of energy, similar to electricity, heat, or light. When some strike a bell, it makes a loud ringing noise. Now instead of just listening to the bell, put the finger on the bell after hearing it. Due to this, we may feel the shaking effect. This movement or shaking, i.e. the to and fro motion of the body is known as Vibration.

The sound is a wave, which moves through some medium by alternately contracting and expanding parts of the medium through which it is travelling. This compression and expansion further create a minute pressure difference which we are perceiving as the sound. Many characteristics of the sound waves are important to understand. These are amplitude, frequency, wavelength, and timbre.

Frequency in the sound wave refers to the rate of the vibration of the sound travelling through the air as a medium. This parameter then decides about the sound is perceived as high pitched or low pitched. In the sound, frequency is also termed as Pitch. The frequency of the vibrating source of sound is computed in terms of cycles per second. A sound wave cannot travel through the vacuum. This property is very much in the contrast with the property of light. One more difference is the fact that sound waves are generally the longitudinal type of waves whereas light waves are the transverse waves.

Decibel: SI Unit of the Sound

Sound is another form of energy which travels in the form of waves through the medium like liquid, air, or even solid substances. As this energy can be measured, then the most common SI unit of sound which is used is the Decibel and it is abbreviated as dB. This unit is generally used to express the ratio of some value of the physical property to another. This scale is termed as Decibel Scale or DB Scale. Also, this unit can be useful to express different reference pressures or intensity. But, remember that the sound intensity given in dB in the air will be different from dB in water. Besides the decibel, some of the other sound units are sone, phon, Hertz (Hz), watt per square meter.

Loudness and Pitch of Sound

The loudness of the sound wave is also determined by its association with the amplitude. Each type of wave has a certain amplitude.

It is used for the acoustic measurements. A sound wave is travelling in acoustic means that the sound is travelling through the air. This instrument is generally a type of small device with the microphone which measures the noise meter. In acoustic, a diaphragm is used as a transducer for the interconversion of mechanical vibrations to sounds, and also vice versa. The diaphragm present in the microphone also reacts towards the changes in air pressure due to sound waves. This instrument is also termed as the Sound Pressure Level (SPL meter). This is because, in the diaphragm movement, the sound pressure deviation is converted into an electrical signal.

When the constant pressure is applied, a microphone will be traced by the voltage produced and it is termed as the microphone sensitivity. The decibel meter is using the sensitivity of the microphone. It converts the electrical signal accurately to sound pressure and shows the resulting level of sound pressure. This instrument is useful to measure the noise and it serves as the level meter. If we are exposed to loud noises for a brief period, then it will not cause much harm, but also the continuous exposure can do physical damage like the eardrums damage. Sound level meters are mainly useful in noise pollution studies for analysing the quantification of various kinds of noise. It helps to measure the intensity of the sound in the decibel unit of the sound.

Q.1: Difference between Pitch and Loudness

Solution: These two are not exactly the same as these appear. These differ on the basis of their tone quality. The pitch of the sound is our ear’s response to the frequency of sound. But, the loudness depends on the energy of the wave. Thus, the pitch is the reason behind the difference in the voice quality of the individuals.

Solution: The decibel is mainly applicable in acoustics. It is used as the unit of sound pressure level. In this, the reference pressure in the air is set as the threshold value of perception of the human. The decibel is useful to express the ratios of power in arithmetic ratios. The total gain of a decibel is also calculated by adding up all the decibel gains.

Q.3: What is the Decibel Scale?

Solution: The human is able to handle an immense range of different sound levels. So, to express sound levels meaningfully in numbers, a logarithmic scale is made. This scale is termed the decibel scale.

Q.4: What is the Decibel Meter?

Solution: We can measure the sound with a device called decibel meter. It is also termed as the sound-level meters. One may also access it on a smartphone through apps. So, measurement of the sound of an environment with other devices like the smartphone which many people always carry to protect their ears more often.