Buoyancy refers to an upward force which is exerted by a fluid. Furthermore, this fluid opposes the weight of an object which is immersed.

There are three types of Buoyancy which are positive, negative and neutral. You can explore more about Buoyancy and its types here.

Buoyancy is an upward force which determines whether an object will float or sink. Furthermore, it measures the difference of an object’s density and the gas or fluid it displaces.

In a column of fluid, pressure certainly increases with depth. This is due to the weight of the overlying fluid. 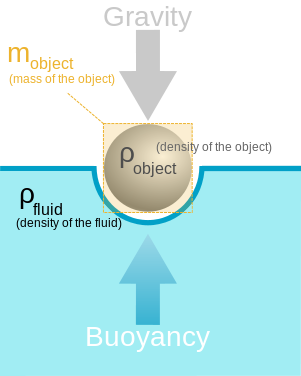 During this experiment, Archimedes dropped the crown in the water. The result of this was that a few gold coins sank faster to the bathtub’s bottom.

Archimedes principle is certainly a law of physics. Furthermore, Archimedes Principle is of fundamental importance in fluid mechanics.

Most noteworthy, Archimedes Principle shows the buoyant force and displacement of fluid.
Archimedes principle states that, when an object gets immersed in a fluid, it experiences apparent weight loss. This apparent loss in weight is equal to the weight of the fluid displaced by it.

The concept of buoyancy applies to many fields and settings. It certainly applies to vessels surveying the ocean floors. It also applies to weather balloons which collect data high up in the stratosphere layer.

This takes place when an object happens to be lighter than the fluid it displaces. Therefore, the object will float. This is because the buoyant force is greater than the weight of the object.

Most noteworthy, swimmers always experience a great amount of buoyant force. The dead sea is popular for attracting tourists who love to float. This is because; saltwater is less dense than freshwater. This results in more buoyant force.

The design of a submarine is such that it operates underwater by storing and releasing water with the help of ballistic tanks. In order to descend, the tanks take in water and thus increase the density of the vessel.

This takes place when the weight of an object is equal to the fluid it displaces. A good example can be of a scuba diver. A scuba diver is skilled in techniques to regulate buoyancy underwater.

The diver takes a deep breath and swims horizontally. This certainly allows the diver to propel forward and not upward.

Fish also control it with the help of an internal swim bladder. This bladder consists of gas. This is quite similar to the submarine. The reason for this is that it acts as a means of altering buoyancy.

Q1 Which of the following is not a type of Buoyancy?

A1 The correct answer is option C., which is central.