Solid state physics is a branch or department of physics which deals with practical and theoretical investigations of the properties of solids, such as superconductivity, photoconductivity, and ferromagnetism. In other words, it is that the study of solids, through various methods like crystallography, quantum physics, electromagnetism, and metallurgy. Solid-state physics is the most important branch of condensed matter physics. It helps to investigate how the large-scale properties of solid materials result from their atomic-scale properties. Thus, physics forms a theoretical basis of materials science. 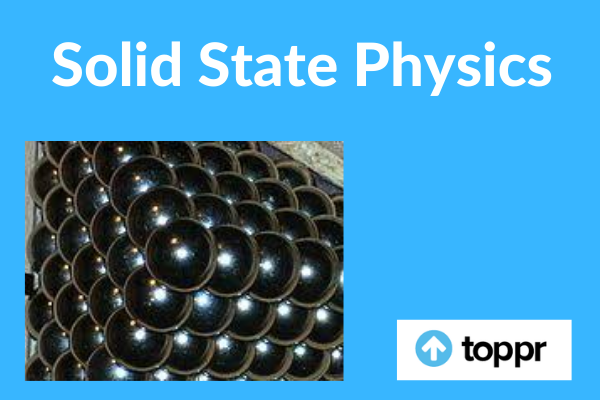 What is Solid State Physics?

One definition of Solid-state physics is, it’s the study of the physical properties of solids in terms of basic physical laws. Like the study of the electrical, dielectric, magnetic, elastic, and thermal property of solids. Solid-state physics is more like chemistry than another branch of physics because it focuses on common properties of huge classes of materials. The study of Solid state physics focusses on how physics properties are in link to the electronic structure. We’ve retained the term Solid State Physics, but Albeit condensed matter physics is more commonly used.

Condensed Matter Physics includes liquids and non-crystalline solids like glass, which we shall not discuss intimately. During the late thirties and forties, modern Solid State Physics came in light. It had it’s most extensive expansion with the formation of the transistor, integrated circuits, and microelectronics.

A separate field going by the name of physics emerged in 1940, with the establishment of the Division of Solid State Physics (DSSP) within the American Physical Society.

Soon after war II, large communities of solid-state physicists emerged in Europe, especially in England, Germany, and also the Soviet Union. Within the U.S and Europe, solid-state became a prominent field through its investigations into semiconductors, superconductivity, nuclear resonance, and diverse other phenomena. During the first conflict, research in solid-state physics was often not restricted to solids, which led some physicists within the 1970s and 1980s to found the sector of condensed matter physics. It addressed common techniques to investigate solids, liquids, plasmas, and other complex matter.

Solid materials as we know is a result of densely packed atoms, which interact intensely. These interactions produce the mechanical, electrical, thermal, magnetic and optical properties of solids. Counting on the type of material involved and the conditions during which it had been formed, the atoms could also be arranged in a regular, geometric pattern (crystalline solids, which compromises metals and ordinary water ice) or irregularly (an amorphous solid like common window glass) pattern. Thus, the majority of physics, as a general theory, concentrates on crystals.

Many properties of materials are suffering from their crystal structure. This structure is often investigated employing a range of crystallographic techniques, including X-ray crystallography, neutron diffraction and electron diffraction. The sizes of the individual crystals within a crystalline solid material vary counting on the material involved and the conditions when it had been formed. Most crystalline materials encountered in daily lifestyle are polycrystalline.

Solid-state physics investigates properties of materials like conduction and warmth capacity. An early model of conduction was the Drude model, which applied the kinetic theory of gases to the electrons during a solid. By assuming that the material contains immobile positive ions and an “electron gas” of classical, non-interacting electrons, the Drude model was ready to explain electrical and therefore thermal conductivity and the Hall effect in metals.

Arnold Sommerfeld combined the classical Drude model with quantum physics within the electron model (or Drude-Sommerfeld model). The near electron model rewrites the Schrödinger equation for the case of a periodic potential. The solutions during this case are Bloch states.

Modern research topics in physics include:

Q.1. Is there any difference between solid-state physics and condensed matter physics?

Answer – Yes there is a difference between them. Like, condensed matter physics focus on the commonality of scientific problems faced by physicists who work on solids, liquids, plasmas, and other complex matter, while “solid-state physics” is often in association with restricted industrial applications of metals and semiconductors.

Q.2. What is a unit cell in solid-state physics?