The scintillation counter is useful in detecting gamma-rays and the presence of a particle. It can also measure radiation in the scintillating medium, energy loss, or energy gain. The mediums are either gaseous, liquid, or solid. The scintillator counter basically comprises transparent crystalline materials such as glasses, liquids, or plastics. One sector of the scintillators is aligned (optical contact) with the pin code. 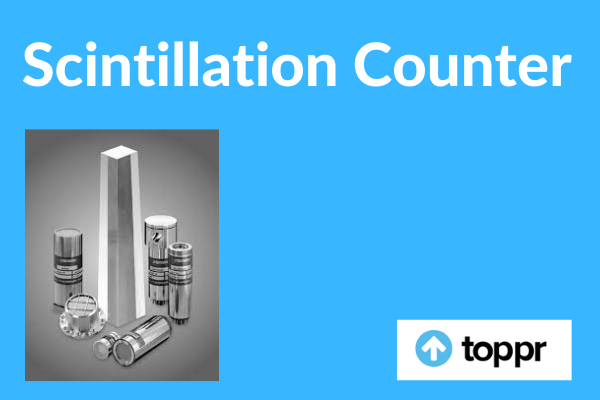 What is the Scintillation Counter?

Scintillation Counter is an instrument useful to measure ionizing radiation. “It contains a scintillator that emits photons in response to incident radiation,” the PMT tube is used to convert the electronics and the electrical signal to process this signal.

A charged particle loses energy as it passes through the scintillator, leaving a trail of excited molecules and atoms. There is a rapid interatomic transfer of electronic excitation energy, which leads to the bursting of scintillation material luminosity characteristics. The scintillation response, when the particle stops leading to the light output.

When an ionizing particle travels through the scintillator material, the atoms ionize along the track. The path of the particle itself is the path of the charged particles. Incase of gamma rays (which are uncharged), their energy is transformed into an energetic electron by either photoelectric effect, Compton scattering or pair production.

The chemistry of atomic de-excitation throughout the scintillator emits a multitude of low-energy photons, usually at the blue end of the visible spectrum. The sum of such photons is equal to the amount of energy deposited by ionizing particle.

Some of these low-energy photons emerge at the photocathode of the attached photomultiplier tube. The photocathode uses the photoelectric effect to produce at most one electron for each photon that arrives.

This group of primary electrons is electrostatically stimulated and electrically-focused so that they strike the first tube dynode. The effect of a single electron on the dynode releases multiple secondary electrons, which are accelerated to attack the second dynode.

Each subsequent impact dynode releases additional electrons and, there is also a current amplifying effect at each phase of the dynode. Each level has a higher potential than the previous to provide an accelerating field.

The output result signal at the anode is in the form of a detectable pulse for each group of photons that arrived at the photocathode and transmit to processing electronics. The pulse holds information on the scintillator about the energy of the actual incident radiation.

The sum of those pulses per unit time indicates the intensity of the radiation. Sometimes, individual pulses are not measured, but only the average current at the anode as a measurement of radiation intensity.

The scintillator must be protected from all ambient lighting so that, incoming photons do not swamp ionization events caused by incident radiation. A thin transparent foil, such as aluminized mylar, is often used to do this. It must have a low enough mass to avoid undue attenuation of the incident while measuring radiation.

The scintillator consists of an opaque crystal usually phosphor, plastic (consisting anthracene) or organic liquid and it fluoresces when struck by ionizing radiation.

There are two major types of scintillators that are in use in the field of nuclear and particle physics. They are:

Q.1. What does the efficiency of scintillation mean?

Q.2. What is an example of a crystal of scintillation?

Answer. Sodium iodide doped in thallium is an example of a scintillation crystal.