Magnetism has been a major topic of research for centuries. We define a Magnet as an object that can create an invisible magnetic field that to cause attraction of opposite poles and repelling of similar poles. Further, the magnetic field comprises an orbital section around which the electrons spins. The force produced as a result causes two objects to attract or repulse without converting into a magnet. However, when a piece of metal like Iron converts into a permanent magnet despite the absence of a magnetic force field, we term it as Ferromagnetism. 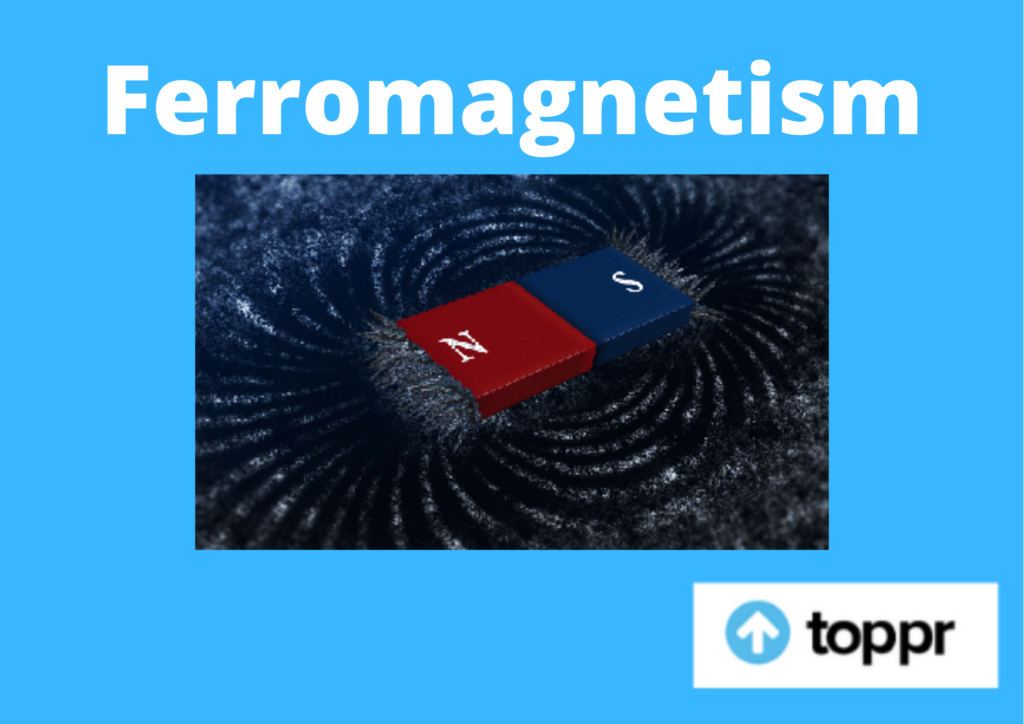 Substances like Iron, cobalt, Nickel, etc. exhibit a phenomenon which we refer to as “long-range ordering”. The unpaired electrons present in the outer orbit line up in a position parallel to the magnetic field and creates a magnetic domain.

Ferromagnets have a differential Relative permeability that fluctuates based on the magnetization field.

Based on the electron’s orbital behaviour, and interactions of various materials, the types of magnetism can be widely classified.

When a substance shows very weak magnetic interactions despite the presence of an external magnetic field it is termed Diamagnetism.

It is generally seen in substances that have a fully complete outer orbital ring. Also, these substances are not susceptible to temperature change.

When a substance is weakly affected by the magnetic field due to the presence of an unpaired electron on the outer orbital ring, the phenomenon is termed Paramagnetism

However, in the case of Paramagnetism, the magnetism though present is nullified if the external field is removed. Only during the presence of a force field partial alignment occurs directed towards the field. This results in a positive susceptibility.

When we see magnetic interactions regardless of the presence or absence of a magnetic field, we term it as Ferromagnetic Substance. They show strong attraction towards the magnetic field.

What is Curie Temperature and Hysteresis?

Electromagnetic fluctuation within the magnetic domain can cause randomized temperature changes which a change in the electron exchange. The temperature at which this phenomenon occurs is termed Curie Temperature.

Ferromagnetic substances generally have a very good retentive memory. Despite the removal of the applied force field, the majority of these ferromagnetic minerals tend to show magnetic properties.

This property is termed Hysteresis. However, the hysteresis properties of a material are not fixed and it can vary based on extrinsic factors like Domain, temperature magnetic grain size, etc.

When neighbouring dipoles of an atom align in a symmetrical manner. It causes an unpaired electron to be displaced into the outer orbital ring, a distinct change in the magnetic moment occurs.

The atomic dipole moment gives rise to a magnetic domain which creates a force filled with polarity in the object.

We must never confuse Ferromagnetism with Ferrimagnetism.

The crystalline structures of ionic compounds have a very distinctive magnetic ordering. Consisting primarily of two sub-lattices held together by oxygen molecule, the anions produced during magnetization causes a phenomenon where the anti-parallel alignment of the latices spin occurs.

Though similar to a Ferromagnetic substance, it is this distinctive unequal magnetic moment and a different magnetic ordering value that differentiates a Ferrimagnet.

Similar to a Ferromagnetic substance, Ferrimagnet also has a spontaneous magnetization value that is below Curie temperature. They are also paramagnetic when the temperature goes beyond Curie Point.

What are the properties of a Ferromagnet?

What are the types of Ferromagnetic materials?

There are two types of Ferromagnetic Materials:

The atoms inside these materials have a wide range of magnetic domains that have a very haphazard and individual magnetic moment. This results in a constant Unmagnetised state.

In some Unmagnetised ferromagnetic when the external magnetic field is applied, the magnetic domain automatically rotates to face the exact direction of the magnetic force field. This causes magnetization of the Ferromagnets.

What are the advantages and disadvantages of using Ferromagnets?

Application of Ferromagnetism in day to day life activities –

Ferromagnets have a very wide range of usability since their conceptualization. Thus, some of the primary sections where we use it:

Question 1: What is the difference between Ferromagnetism and Paramagnetism?

Answer 1: In Ferromagnetism a distinctive repulsion or attraction is seen. Further, the uniform movement of the electron in the direction of the force field causes this.

Moreover, in the case of Paramagnetism, the electrons have no specific spin direction which results in a very weak repulsion and attraction which is barely negligible.

Question 2:How do you identify a Ferromagnetic object from a Magnet?

Answer 2: The ferromagnetic object shows a similar feature like a magnet. However, on removing the magnetic force field, a Ferromagnet object still remains in the oriented direction of the force field.