The band theory of solids is not the same as others as the atoms arrange in a very close manner to each other. It is such that the energy levels of the outermost orbital electrons get affected. However, the neighbouring atoms do not affect the energy level of the innermost electrons. 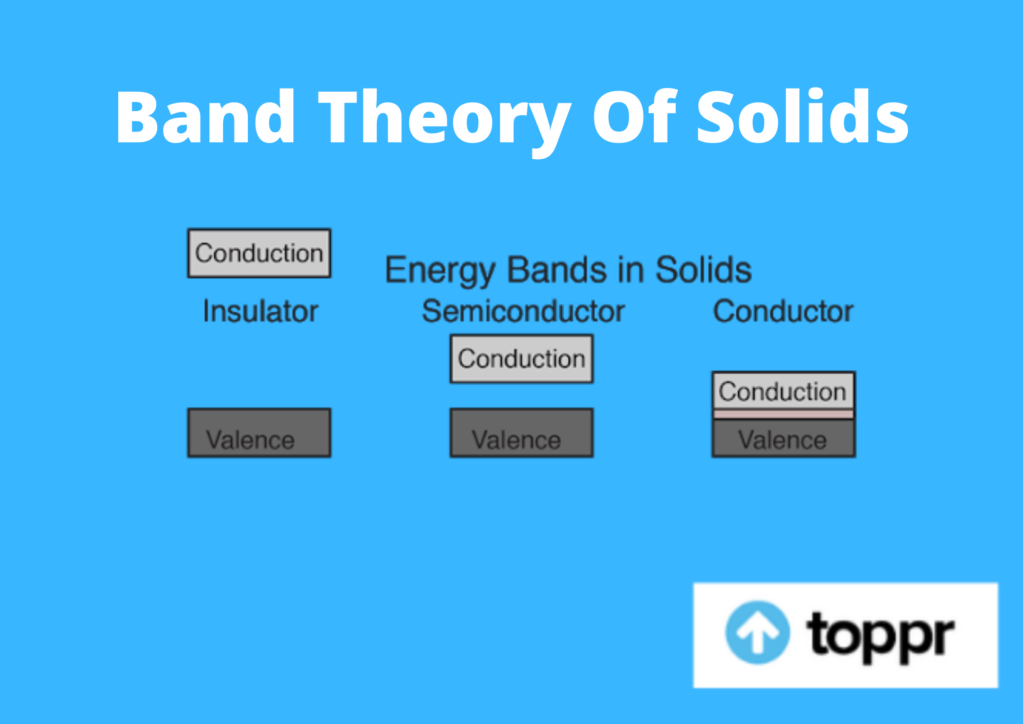 Introduction to Band Theory of Solids

It is a theory which explains the quantum state that an electron takes inside metal solid. Every molecule consists of numerous discrete energy levels. This theory explains in detail the way electrons behave inside a molecule.

Further, in solids, 1023 stacked up lines confined in a tiny space will look like a band. Thus, it forms an energy continuum which we refer to as energy bands. With this theory, we get a very useful way of visualizing the difference between conductors, insulators and semiconductors are to plot all the available energies for electrons in materials.

Thus, in place of discrete energies like in free atoms, the available energy states form bands. In-band theory of solids, there are numerous energy bands. However, the most important energy bands in solids are as follows:

The energy band which comprises of valence electrons energy levels is referred to as the valence band. This band is present below the conduction band. Further, the electrons of this band are loosely bound to the atom’s nucleus.

This energy band comprises of free electrons energy level. In order to electrons to be free, external energy must apply in such a manner that the valence electrons push to the conduction band and become free.

Energy Levels inside a Molecule Composed of Two Atoms

When two sodium atoms are very close to each other almost creating a molecule, each atom will not have the configuration as it is followed as an individual atom. If they do, they will be violating Pauli’s exclusion principle.

As a result, it will get a lot of electrons of the same energy levels. When two atoms remain close to one another, their respective energy bands will overlap on each other. Thus, it will transform into a molecular orbit.

Energy Levels inside a Molecule Composed of Three Atoms

Energy Levels inside a Solid Composed of Avogadro number of atoms

Ultimately, if there is an entire field composed of sodium with 1023 atoms packed together, each molecular orbital of this solid will have now 1023 discrete energy levels.

Energy Levels inside a Solid Composed of n-number of Atoms

FAQ on Band Theory Of Solids

Question 1: What is a valence band?

Answer 1: The energy band which comprises of valence electrons energy levels is referred to as the valence band. This band is present below the conduction band. Further, the electrons of this band are loosely bound to the atom’s nucleus.

Question 2: What will happen in the system when two atoms come very close to each other?

Answer 2: When two atoms come very close to each other, their respective energy bands are going to overlap on each other. Thus, it will transform into what we refer to as the Molecular orbit.