Let us try and do a few activities and observe a few natural phenomena.

“Why then, does the scale attract paper but the balloon repel the other balloon?” The answer is simple. The balloons repel each other because both have the same type of charge. The plastic scale and bits of paper, on the other hand, have different types of charge and hence attract each other.

Try this: Rub the balloon with a woollen cloth and the scale with a polythene bag and bring them closer together. They attract each other. Why? Because they have different types of charges.

Charges can be of two types: positive and negative.  When a positive and negative charge come near each other, they attract. Repelling happens when two positives or two negatives come close to one another. These electrical charges generated by rubbing are static in nature since they do not move. And what happens when charges move? They constitute an electric current.

Another Example – The Electroscope

Take a clean and empty jar. Now, take a piece of cardboard which is slightly larger than the mouth of the jar. Make a small hole right in the center of the cardboard. Next, take a paper clip and open it in the shape of an elongated C. Take aluminium foil and cut two strips of about 4cm x 1cm each. Hang them on the paper clip and hang the clip as shown in the figure. 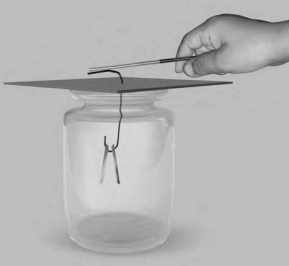 Now rub an empty refill with a polythene bag and touch it to the end of the paper clip and observe the aluminium strips. Do they attract or repel each other? They will repel because they receive the same charge from the charged refill. And how do they receive the charge? Through the metal clip of course because metals are good conductors of electricity. This is a good way of checking if an object is carrying any charge. This device is known as an Electroscope.

Now, replace the charged refill with your finger. The aluminium strips collapse back into position. Touch the charged refill again and they repel again. Why does this happen? The reason is that the foil strips discharge the charge through your body. This process is called Earthing.

Q1. How many types of charges are there and what are they called?

Ans. There are two types of charges: positive and negative charge.

Q2. What is Earthing?

Ans. Earthing is the process of discharge from the charged object to the ground.