To measure the length of the very small objects less than a centimeter, a millimeter is a suitable unit. The millimeter with abbreviation as mm is a unit of displacement or distance for a small object.

The mm is equivalent to 0.001 meters. Also, there are about 25.4 millimeters in one linear inch. In this topic, the student will learn about millimeters and their conversions.

Formally, one millimeter is the distance travelled by a ray of electromagnetic (EM) energy through a vacuum in a time span of 3.33564095 x 10-12 seconds.

Thus, the millimeter and its kin are also used to specify the wavelengths of electromagnetic fields, especially at ultra-high and microwave radio frequencies.

Further, such radio spectrum occupies an informally defined range of wavelengths from roughly 1 mm to several tens of kilometers. The speed of EM-field propagation in a vacuum is 2.99792458 x 1011 millimeters per second.

One simple way to measure the centimeter is by using everyday objects that are close to 1 centimeter in size, like a pencil, pen or highlighter. Millimeter gives more precision value to such small objects. 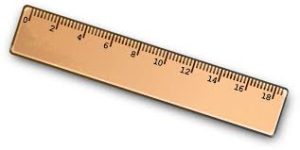 History of a Millimeter

The metric system of weights and measures was defined and adopted in France in 1795. John Wilkins was the first person to publicly recognize the need for universal length measurement.

So as to carry out a measurement locally to avoid having to have a definition that refers to a stored reference unit.

Thus, he proposed using the length of a “second’s pendulum” which made half an oscillation per second. But later, it was found that there is a slight difference in this length around the world.

Therefore, the Academy of Sciences devised a new measure, 1/10000000 of the distance from the Equator to the North Pole.

Moreover, they put to use the new value to create a metal bar that stores at the BIPM’s headquarters and known as “international prototype meter”. This standard has since been superseded and further defined the meter as “1650763.73 wavelengths of the orange-red emission line of a krypton-86 atom in a vacuum”.