If we need to quicken an item, at that point we should apply a power. Applying a power expects us to accomplish work. After work has been done, energy has been moved to an object. The item will be moving with another consistent speed. The energy moved is kinetic energy. It relies upon the mass and speed accomplished. 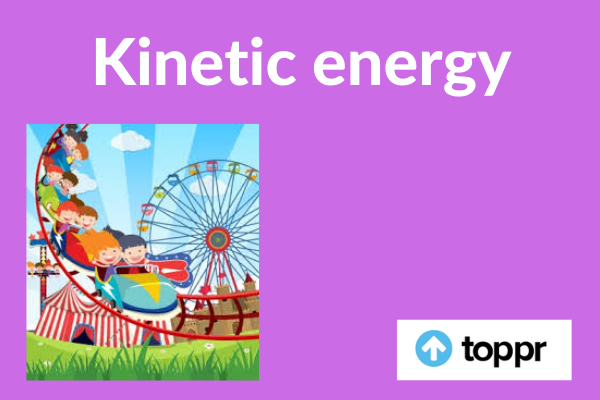 What is Kinetic Energy?

In science, the kinetic energy (KE) of an object is the energy that it has because of its movement. It is the work that is expected to quicken a body of a given mass from rest to its expressed speed. While picking up the energy during its quickening process.

The body keeps up this kinetic energy except if its speed changes. A similar measure of work that is finished by the body while it is decelerating from its present speed to a condition of rest. In traditional mechanics, the kinetic energy of a non-turning object of mass m going at a speed v is \(\frac{1}{2}mv^{2}\). In relativistic mechanics, v is significantly less than the speed of light.

The kinetic energy has its underlying foundations in the Greek word kinesis, signifying “movement”. The division between kinetic energy and potential energy can be followed back to Aristotle’s ideas.

The rule in traditional mechanics that E =\(mv^{2}\) was first evolved by Gottfried Leibniz and Johann Bernoulli. He depicted kinetic energy as living power. The Willem’s Gravesande belonging to the Netherlands gave trial pGravesande established that their entrance profundity was relative to the square of their effect speed.roof of this relationship. Following the process of dropping loads from various statures into a square of mud. Willem’s

The terms kinetic energy and work in their implications go back to the mid-nineteenth century. Early understandings of these thoughts can be ascribed to Gaspard-Gustave Coriolis. He, in 1829 distributed the paper named Du Calcul de l’Effet des Machines illustrating the arithmetic of active energy. William Thomson, later Lord Kelvin, is given the acknowledgement for begetting the expression “kinetic energy”.

To calculate kinetic energy, we follow the outline and begin by finding the work done, W, by a force, F. Consider a box of mass m being pushed through a distance d along a surface by a force parallel to that surface. As we know,

We know kinematic equations of motion. If we substitute the acceleration in the equation.

Alternatively, the change in kinetic energy is equal to the net work done on an object or system.

This conclusion is the work-energy theorem. It applies quite generally, even with forces that vary in direction and magnitude.

The Kinetic Energy of Systems

A visible body that is fixed. For example, a reference outline has been decided to relate to the body’s focal point of force may have different sorts of inward energy. It can be at the sub-atomic or nuclear level, which might be viewed as kinetic energy, because of sub-atomic interpretation, turn, and vibration, electron interpretation and turn, and atomic turn. These all add to the weight’s, as given by the uncommon hypothesis of relativity. While talking about developments of a perceptible body, the active energy alluded to is normally that of the naturally visible development as it were. However, all inward energies of different types add to weight’s, latency, and absolute energy.

There are five kinds of kinetic energy that are brilliant, warm, solid, electrical and mechanical.

Radiant energy is a sort of kinetic energy as it is consistently moving to go through medium or space. The energy is made through electromagnetic waves and is most regularly experienced by people as warmth. Instances of brilliant energy are:

Thermal energy or heat energy is produced because of the fast movement of iotas when they slam into one another. Warm energy is like brilliant energy in that both can be knowledgeable about the type of warmth or warmth. The thing that matters is that while brilliant energy alludes to waves or particles. Thermal energy depicts the degree of action among the iotas and atoms in an item. Instances of warm energy are:

Sound energy is created by the vibration of an object. It goes through the medium yet can’t go in a vacuum as there are no particles to go about as a medium. Instances of sound energy are:

The amount of dynamic energy and potential energy is mechanical energy. One can neither create nor devastate it. However, we can change it over from one structure to others. Instances of mechanical energy are:

Answer: Kinetic energy is the energy of an object has due to its movement.

On the off chance that we need to quicken an item, at that point we should apply a force. Applying a force expects us to accomplish work. After work has been done, energy has been moved to the item. The object will be moving with another steady speed. The energy moved is kinetic energy. It relies upon the mass and speed accomplished.  We can move kinetic energy among objects and change the kinetic energy into different sorts of energy. For instance, a flying squirrel may slam into a fixed chipmunk. Following the crash, a portion of the underlying dynamic energy of the squirrel may have been moved into the chipmunk or changed to some other type of energy.

Q.2. Can the kinetic energy be negative?

Q.3. When is the kinetic energy maximum?