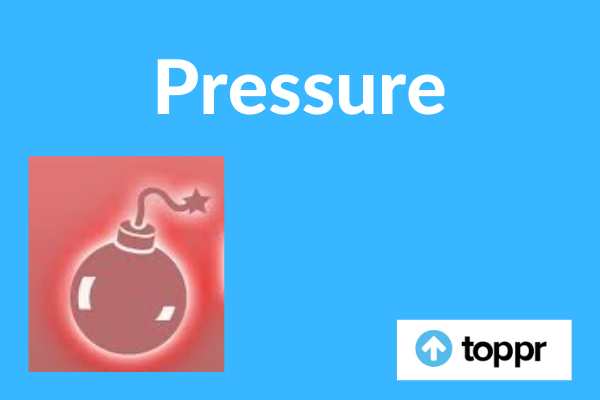 The pressure is a physical quantity that actually depends on both the force applied on a body and the amount of surface area involved in the process.The pressure is defined as the perpendicular force applied on a surface of an object or by an object per unit area which is in contact. It indicates the distribution of the perpendicular force applied to the object over its surface area. The symbol ‘p’ or ‘P’ denotes the pressure over an object. Although ‘p’ is recommended for use by the IUPAC, ‘P’ is generally used over the field. The presence of other symbols affects the usage of the upper case or lower case symbols of pressure.

When power is used in context, then pressure is denoted by lower case p for avoiding confusion. When an equation contains both momentum and pressure, then momentum is assigned lower case p and pressure is denoted by upper case P. It also acts as a potential for the flow of wind. As we have observed, wind flows from high-pressure areas to low-pressure areas. In the field of elasticity, there is a quantity similar to pressure known as the stress. Stress is also given by the perpendicular force per cross-sectional area. This is used mainly for strings and elastic materials.

Mathematically, we can denote pressure by the following formula,

p is the pressure exerted

F is the force applied on the surface

Although pressure is calculated as the product of two vector quantities, it is a scalar quantity. It is the relation between the vector area element (normal vector to the surface) and the perpendicular force acting on it. It is the quantity which relates both the normal vectors.

The manometer is an instrument used to measure the pressure in a liquid. It consists of a U-shaped tube filled with liquid. It works on the principle that liquid columns with equal height exert an equal amount of pressure. Thus, this instrument measures the difference between the pressures acting in the two arms of the tube resulting in a different height.

A barometer is an instrument used to measure the atmospheric pressure in an environment. The pressure of the atmosphere is helpful in forecasting the changes in the weather of a region. As the air pressure changes with the altitude, the barometer can also be used to calculate height above the sea level.

Fluid refers to both liquids and gases. The Fluid pressure is generally the stress at some point in the fluid due to the compressive nature. It may occur in two situations. One, in bodies like oceans, the atmosphere when fluid is under open channel flow and thus known as the open condition. Other, when we consider a water or gas line going through a confined pipeline known as the closed conduit.

When ignition of explosive mist, air suspensions with dust, some highly inflammable and reactive gases occur. This ignition occurring in confined spaces creates what we call explosion pressure.

When a moving fluid is stopped forcefully to make it stationary, it exerts stagnation pressure. A liquid which is moving with a high speed is expected to have a high stagnation pressure when it is forced to stop still. The same liquid has low static pressure.

Surface pressure is the two-dimensional analogue of normal pressure. It is denoted by the lateral force per unit length applied on a line perpendicular to the length of the surface. Measuring surface pressure can help in investigating the properties of surface chemicals used in many industries.

In a closed system, a vapour is in thermodynamic equilibrium with its condensed phases. In this situation, the vapour exerts a pressure which is the vapour pressure. This is due to the fact that all solids and liquids retain the tendency to evaporate and form their gaseous states. While all the gases have the tendency to condense back into their liquid or solid phases.

Kinematic pressure is the pressure measured per unit mass density of an object. It is used in the Navier-Stokes equation.

Q.1. What are the distinctions between absolute pressure and gauge pressure?

Q.2. How does the sharpness of a knife and its ability to cut describe the role of pressure?

Answer. The ability to cut an object depends upon the pressure exerted at an instant. When we use a blunt knife and apply certain force on it. The knife is unable to cut properly because the contact area between the knife and the object is more. As pressure is inversely proportional to the surface area in contact, the lesser area indicates more applied pressure. Thus, when a knife sharpens, its cutting ability highly increases. This is due to the reason that a high amount of pressure is now applied to the object.

Q.3. What are the different units of pressure?

Answer. The SI unit of pascal is one newton per square meter. Other units of pressure include pounds per square inch which has a wide use outside of the standard metric system. We denote the CGS unit of pressure by Barye which is equal to 1 dyne per square centimetre. 1 Barye is equal to 0.1 Pascal.