Work is a very important physical quantity in the field of physics for a number of reasons. Its conversion in the energy of different forms is one of the main reasons. 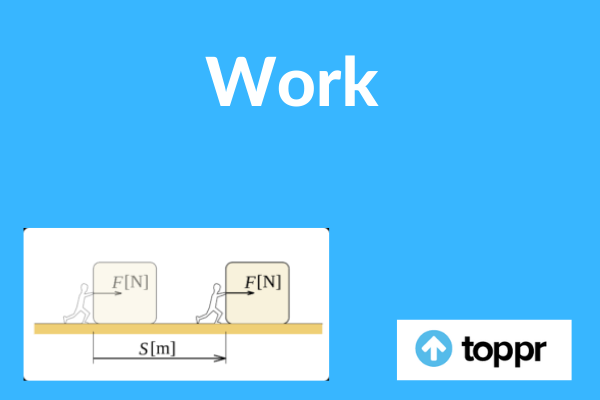 The term ‘work’ was first introduced by Gaspard Gustave Coriolis, a mathematician from France meaning “weight lifted through a height”. In terms of physics, work is the transfer of energy from or to an object when it suffers a displacement due to the application of the force. Work has three main constituents: force, displacement and cause. So, for a force to do work, there needs to be a displacement and the cause of that displacement should be the force applied. Thus, when a body undergoes no displacement, the work done by or on the body is zero.

Some examples could be a person applying force on a wall and getting exhausted. In this case, the wall shows no displacement, thus no work is done by the person on the wall. However, when a ball falls on to the ground, it is definitely an example of work being done. This is because a force of gravity is acting on the ball causing the vertically downward displacement.

Work done on a body is not only the displacement of the body as a whole from one place to another but also the displacement of particles in the body. For example, rotation of a shaft, compression of a gas, and even motion of internal particles caused by an external magnetic field count as work. Work can also be caused by torque rather than a force which causes angular displacement of a body causing it to rotate.

As we know, work depends on the force applied and the displacement of the body. Work is:

But this force needs to be in the direction of motion. When the force and the displacement are at an angle with each other, work is:

In cases including changes in magnitude or direction being significant, we calculate work using calculus. Force may change in magnitude and direction for some finite displacement but over a smaller displacement, it changes less and thus we approach an infinitesimally small size. While we are at it, we should know that work is a scalar quantity which means that it has only magnitude and no specific direction but is a product of two vector quantities force and displacement.

So, in order to get force and displacement in the same direction, we calculate the dot product of these vectors. The dot product is a scalar product that depends on the similarity of direction.

This equation is basically a path integral. Thus work can be expressed as the area under the curve of the graph of force plotted against displacement. Integration helps in finding the area by cutting the curve into infinitesimal segments of uniform width, measuring the area of the rectangular strip that fits every segment of the curve and the x-axis, and finally adding them together. Work has an SI unit of Joule(J) which is named after the English scientist James Prescott Joule and defined as the work required to exert a force of 1 Newton and cause a displacement of 1 metre in the same direction.

Energy is the ability of a body to perform work. Some examples justify this statement.

A speeding bullet possesses Kinetic energy which we can measure accordingly. This energy is gained by the bullet as a result of the work done on it by the gunpowder when it loses its chemical potential energy.

A hot cup of coffee is also a hub of thermal energy and it acquires it with the help of a microwave oven. This in turn works due to electrical energy from the supply.

When we lift a load through a height against the force of gravity by applying a force greater than the gravitational force, the work done on the body is eventually stored as the gravitational potential energy of the body.

This brings us to the work-energy theorem. Work energy theorem states that the work done on the system is equal to the change in its energy.

Case 1: When a system does work in its environment, work is negative, and hence change in energy is negative which results in the decrease of the energy of the system. Here, work is done by the system.

Case 2: When a system experiences the work done by the environment on it, work is positive, and hence the change in energy results in an increase in the overall energy of the system. Here, work is done on the system.

Energy can be stored in many different forms and thus can be interconverted by applying for some work. This also indicates that the unit of both work and energy is Joule. Mostly, work is done to convert energy from one form to another which has an unavoidable loss of energy in form of sound and heat.

Q.1. What is the work done in the compression of a gas?

Answer. The mathematical expression for work is dependent on a number of factors. In this case, to compress a gas at a constant temperature, work is the product of pressure times the change in the volume of the gas.

The states of the gas such as pressure and volume before and after the process can be calculated with the help of the Ideal gas equation.

This type of work is useful in analyzing the performance of many pumps and engines involving isothermal and adiabatic compressions and expansions resulting in the conversion of energy into work.

Q.2. What are the different units to express work?

Answer. Work has the SI unit of Joule(J). 1 Joule is expressed as the work done when a force of 1 N applied on a body causes it to move through a displacement of 1 metre in the direction of the force.  A calorie is also in use for diet and nutrition purposes which is equal to 4.184 J. Foot pound is a primitive unit in use for work which is equal to 1.355 J. Erg is the CGS unit for work and 1 erg gives 10-7 Joule. A ton of TNT is also a unit in use for explosives and army related affairs.

Q.3.How to calculate work in a rotational motion?

Answer. An equal and opposite pair of forces result in the force couple and this nullifies the force but implies torque on the body. Rotational motion is caused by the moment of force which is known as torque. Thus, when a shaft is rotated through an angle due to the torque applied, work done can be calculated as

where \(\varphi\)  is the angle of rotation,

T is the torque applied.