Magnet is a material that produces a magnetic field. You must have seen the various types and shapes of magnets in various applications such as speakers, electric motors, actuators, and even in toys. Have you ever wondered how the magnets align themselves along the North-south direction? Let us discuss it in detail and you will get the answers. 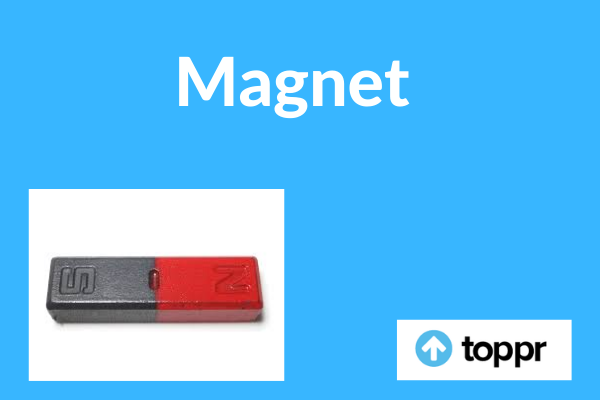 Magnet in a Compass

From ancient times the magnets are in use in a compass for navigation. It is because Earth itself possesses its own magnetic field. It is generated due to the electric currents that flow in the molten core. Thus the Earth acts like a magnet. Every magnet has two poles. These poles get their name from the North and South poles of the Earth. Here, the Magnetic South pole of Earth is located on the geographic North Pole. And opposite poles of a magnet attract each other. Thus the north pole of the magnetic needle in the compass points towards the magnetic south pole of the earth i.e. geographical north pole.

The concept of Magnet is derived from lodestones which are naturally magnetized minerals that attract iron. As mentioned earlier Permanent magnets can be formed by applying a magnetic field to the ferromagnetic material. A wide range of magnets with different properties and different shapes are available in the market. All these magnets are made by the fusion of powdered form under high pressure and heat, generally known as powder metallurgy. For example, barium ferrite, samarium-cobalt, neodymium iron boron, etc. are used in powdered form to manufacture different types of magnets. Neodymium magnet is the strongest magnet in terms of magnetic force to date. We measure the strength of the magnetic field in terms of gauss.

The electromagnet is also a magnet but it requires electrical energy. In the case of Electromagnet, the material is magnetized by applying a magnetic field. But the interesting thing is that the magnetic field is not provided by the magnet, but by a current-carrying coil. The electromagnets are widely in use in various applications, such as speakers, electric motors, actuators, Cranes in a scrapyard.

How it is Useful?

Consider the loudspeaker. In the loudspeaker, a permanent magnet is in use and is surrounded by a coil. The current-carrying coil will generate the magnetic field which interacts with the existing magnetic field of the permanent magnet. As a result, the coil pulls or pushes away from the magnet. This pulling or pushing force is proportional to the current passing through the coil. Thus, we can control it. The coil is attached to a diaphragm. As the oscillating current signal is fed to the coil the coil starts to vibrate, vibrating the diaphragm which results in creating a pressure wave in the air. Thus it generates sound wave.

Actuators like solenoids also work on the same principle but they are generally designed for low-frequency range. On the other hand, loudspeakers are designed for an audible range of frequency which is (20 Hz-20 kHz). It is also in use in electric motors, where the electric energy converts into rotational energy. The electromagnets are also in use in the famous Maglev trains which levitate on tracks.

According to Faraday’s law, fluctuating magnetic flux results in a voltage induced in a circuit. The design of a wide range of energy harvesters is on the basis of this law. Dynamo and windmills are also energy harvesters as per the faraday’s law. One more application where magnets are useful is the microphone. Here the signal is not provided, instead, the signal is recorded as the diaphragm fluctuates due to external disturbances i.e. when we speak.

According to the requirements in the application, the magnets can be of any shape and size. Currently, magnets with the shape of a sphere, cylinder, disc, ring, horseshoe, needle, cube, and cuboid are available in the market.

Applications of Magnets or Electromagnets

Answer: Heat, radiation, impact forces, and strong electrical currents will affect the magnetic strength. The strongest magnet to date i.e. Neodymium magnets corrode in high humidity environment. But one can prolong its life by applying a protective coating. Apart from this, the magnets tend to lose their strength over time. Modern magnets may lose a very small fraction over years.

Q2. What is the strength of Earth’s Magnetic field?

Answer: The strength of the Earth’s magnetic field on the surface is about 0.5 gauss and it increases as we move towards the core.

Q3. How can you measure the strength of a magnetic field?

Q4. What are eddy currents?

Q5. What are the cons of electromagnets?

Answer: The electromagnets heat up when the excess amount of current passes through the coil. Thus we can say that a part of the energy converts into heat which results in a reduction in the efficiency. Also if we do not use a proper cooling system, then it may damage the circuit as well as the coil.