In view of the coronavirus pandemic, we are making LIVE CLASSES and VIDEO CLASSES completely FREE to prevent interruption in studies
Quantitative Aptitude > Independent Events

The probability of an independent event in the future is not dependent on its past. For example, if you toss a coin three times and the head comes up all the three times, then what is the probability of getting a tail on the fourth try? The answer is simply 1/2. Whatever

Example 1: Out of the following examples, which represents an independent event?

A) The probability of drawing an Ace from a well-shuffled pack of 52 cards, twice.

C) Two queens which we draw out of a well-shuffled pack of 52 cards.

D) All of the above events are examples of independent events. 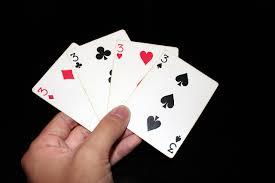 Answer: Let us see each of the options one by one. In option A), the two of events are drawing an ace and then drawing another ace. When we draw the first ace, we have one event in our favour and 52 in total. So the probability is 1/52. For the second draw, there is 1 less card in the deck, so these events in which we have only one pack of cards can’t be independent events.

Rule Of The Product

The total probability of events that are independent is found out by multiplying the probability of these events. Let us see with the help of examples:

Example 2: Two coins are flipped simultaneously. What is the probability of getting heads on either of these coins?

Example 3: A die is cast twice and a coin is tossed twice. What is the probability that the die will turn a 6 each time and the coin will turn a tail every time?

Q 1: A die is cast 6 times. What is the probability that each throw will return a prime number?

Q 2: A coin is flipped six times. What is the probability of getting a head each time?