In view of the coronavirus pandemic, we are making LIVE CLASSES and VIDEO CLASSES completely FREE to prevent interruption in studies
Chemistry > General Principles and Processes of Isolation of Elements > Occurrence of Metals

Did you know what the third most common element on our planet is? You will most likely be surprised to know that it is Aluminium. And while this is true, aluminium is not found on earth in its natural state, but as various compounds. Let us learn more about the occurrence of metals on earth.

So, we obtain metals from the earth’s surface, or from below earth’s surface. However, not all metals are in their pure form. Some are mixed with impurities and some are a mixture of various other elements. We can actually classify the three basic ways of occurrence of metals in our lithosphere. 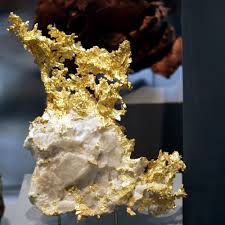 A native metal is one that exists in nature (on earth’s surface) in its actual metallic form. It can either exist in pure form or as an alloy. Some such native metals that we can identify as such are iron, tin, tungsten, antimony, arsenic and zinc. Native metals also include two specific groups, namely the Gold group and the Platinum group.

Relatively very few native metals are in existence. Only metals that are generally less reactive can be found in their native state since they can resist naturally occurring chemical reactions such as oxidation and reduction. Gold, Silver and Platinum are the metals that occur in their true native form in large quantities around the world.

An alloy is a mixture of two metals or even one metal and another substance, but the major component being metal. Metals usually have some excellent properties for commercial use such as high strength and electrical conductivity. To enhance them even further we mix metals with another component to give them extra advantages.

Steel is an excellent example. Here Iron is mixed with a very small amount of carbon. This gives a substance that is stronger and lighter than just pure metal. Other such alloys are Brass ( Copper and Zinc), Bronze (Copper and Tin), Stainless Steel ( Iron, Nickel and Chromium) and countless more.

Now as the case may we find very few metals in our atmosphere in their natural form. Most metals are found mixed together with other materials and minerals. Some such materials from which we can extract metals that we desire are known as Ores.

Now, these ores need to be processed so metals can be extracted from them. This entire process of extracting metals from ores is metallurgy. On a basic level, this involves three main steps, which are

Q: Name which one of these is a mineral of manganese?

Ans: The correct answer is “C”. Pyrolusite is a black amorphous mineral which consists of manganese oxide.