Thus, these figures indicate the sequence in which the paper is to be folded. The designs from the cut will appear on each one of the folds made on the paper. In questions based on paper folding and cutting it can be asked to find either the folded or unfolded pattern of the sheet. Let us see some examples below. We also have some really tricky problems that have been put under the higher order thinking section. Let us begin!

Some Solved Examples For You

Directions: In each of the following problems, a square transparent sheet with a pattern is given. Figure out from amongst the four alternatives as to how the pattern would appear when the transparent sheet is folded along the dotted line.

Answer: The right half of the transparent sheet is being folded along the dotted line and placed on the left half of the sheet. The figure thus obtained resembles the answer figure (c).

Directions: In the following question, a piece of paper is folded and cut as shown below in the question figures. From the given answer figures, indicate how it will appear when opened? [S S C (C P O) 2013] 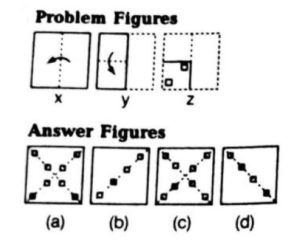 Answer: In these types of questions, the easiest thing to do is to start with the last picture and undo the steps taken in the question. Let us see, if we start from the figure z, and move to y, we will get a figure that has square cuts as half diagonals in the left half only. From the figure y we have to now move to the figure x, that would give a figure similar to the one in (a). Hence the correct answer here is (a).

Answer: If you look at the options, you would see that the option (a) can’t be the answer because if the sheet was folded at the middle the triangles will be joined at the vertex. Similarly, you can discard all the other options except (d). The correct option is (d).

Q2: A piece of paper is folded and punched as shown below in the question figures. from the given answer figures, indicate how it will appear when opened? [S S C (C G L) 2013] Answer: In the last problem figure, we see that the paper is folded in the form of a right triangle and the cut is made near the midpoint of the hypotenuse inside the triangle. Unfolding the triangle would give us another right triangle which has marks near the two sides apart from the hypotenuse. At this point, we can say that the answer could be either (a) or (d). Similarly, if we keep unfolding we will see that the correct answer is (d).

Learn the concept of Counting of Figures here.

Q3: A piece of paper is folded and punched as shown below in the question figures. From the given answer figures, indicate how it will appear when opened?  [S S C (C G L) 2013] 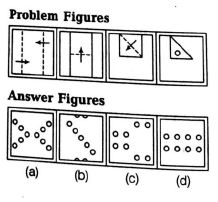 Answer: As we have done with the other questions, we will begin with the last problem figure and move on to the first one, while tracing out all the spots on each step. Whence we do that we will see that out of the four options, the only one that represents the answer figure is the one in option (a).

Q1: A triangular sheet of paper has been folded and punched as shown in the following series of figures. How will it appear when opened? [S S C (Steno) 2011] Q2: A square piece of paper cut at the edges as shown is taken and folded as shown below. How would the folded pattern look?     [S S C (Multitasking) 2013]