Sometimes in the images section, we get layered images. That means we will have images that have many complicated and intricate subparts. The question is to identify these parts in the image or when separate from it. Here we will solve many such questions and try and get our concepts about the embedded images clear.

Let us first see an example of an embedded image. Consider the following scenario.

Example 1: Here we have a figure named X. The task is to find X in the other four images. So which of the four images contains the figure X?

Answer: The answer is not that simple. You will need to take into account the orientation too. This means that in case you don’t find X to fit a particular option, you will have to change the orientation of one of the two figures.

In the above example, we see that the figure X is not present in (2), or (4). Also (3) seems to contain X but as you look at the bottom, you will find out that even (3) is not the right answer. So that leaves (1). if you were to take X and put it in (1), it will not make any difference to either of the two figures. So the correct answer here is (1). In other words, we say that X is embedded in (1). You can see that in the below figure:

Example 2: Can you find the figure out of the following group, that contains the figure X?

Answer: You may be tempted to choose (2) or (4) but that would be wrong. If you look at the option (2), you will see that the orientation is not correct. Also in (4) even though the orientation is correct, the figure is split at points and thus not the correct option. Also, you will easily see that (1) is not the correct option as it neither has the orientation and nor the symmetry. This leaves the option (3). Figure X can be plotted on (3) without changing either of the two figures. This can be seen as below:

Thus the correct option is (3).

We may also get other types of questions in embedded figures. We may also get questions that will ask you to complete an incomplete figure or to find a figure that is missing out of a series. Let us see an example.

Example 3: Look at the following image: 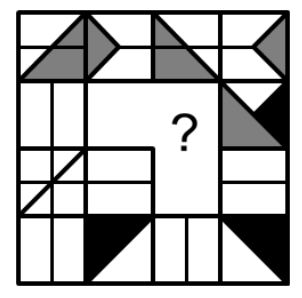 Now choose which among the following images will fill the blank in the centre of the figure above such that it completes it perfectly without disrupting the pattern?

Answer: At first it will seem a bit difficult. But let us focus on the original figure and try and find a pattern in the shapes. In the question figure, we see that each column is a reflection of another alternate column. For example, let us see the first row of figures:

The first and the third columns are mirror images of each other and so are the second and the fourth columns. Thus we can say that the rule is that the pairs of columns are reflections of one another. And therefore the correct option is the last figure of the group or the following figure: 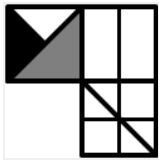 Similarly, we can solve other questions on the topic of embedded images.

Another little exercise that you can do to improve your cognitive skills in identifying shapes is to find the odd one out. Let us see an example:

Example 4: From the following figures, choose the odd one out!

Answer: All the images contain the same star at the centre. The colour and even the shade is the same. So there is no point in wasting time on it. The difference lies in the number of the stars and their arrangements around the central star. Again we see that the number of smaller stars is different for almost all the figures except (2) and (5) which both have one star each. As a result, we can say that it is not the number of these little stars that determines whether a given figure belongs or not. So it must be the orientation.

Indeed we see that all the frames besides the frame five are symmetrical, which means that they can be crossed somewhere bu a straight line that will divide them into two similar, halves that are mirror images of one another. In image 5, the symmetry is not bilateral. It is impossible to split it into two identical parts. Therefore the odd one is number (5) and the correct option is E) 5.

Q1: There are five figures given below. One of them is titled X. Find an image that when overlapped with the image labelled X doesn’t change at all?