Number Sequence in the missing number section is a bit different than the sequences that we see in the number series tests. For example, in number Sequence we have numbers put into patterns like squares, triangles, swastikas etc. and there is a missing number somewhere. There is an algebraic or a non-algebraic rule that governs the assembly of the numbers. You have to find this number by guessing the pattern from other sections of the arrangement. Here we will see number series questions of this kind and develop some important methods and tricks that will help you solve it conveniently. Let us begin!

Number Sequences And The Hint Number

Directions: In the following square, numbers have been arranged following a specific order. Can you guess the missing number?

This is how the questions look. Sometimes the numbers are in the square, sometimes on the vertices of a triangle. The rule is that there is some mathematical or non-mathematical logic that governs this arrangement of numbers. This rule is like the key to the lock, once you have it you can predict any number of the patter. Usually, one pattern will have a unique rule. Let us solve these examples beginning with the one present above. 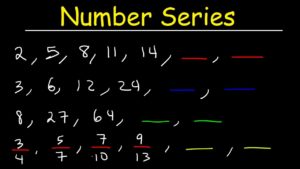 Answer: The rows go from left to right and the columns go from top to bottom. The rule may be either in the rows, the columns, or the diagonals. However, it will be only one. The first thing to do, or in other words the rule of the thumb to solve this pattern is to take a row or a column and select the largest number. For example, consider the following two tables.

The numbers in the first table are 6, 9 and 11. So the largest number of the row is 11 and we have to figure out how to generate this number 11 from the other two numbers i.e. 6 and 9. The difference between the two numbers is 3 and their sum is 15. There seems to be no way of getting 11. Let us see the column then.

Combination of Arithmetic And Reasoning

Sometimes you may have to use a combination of reasoning and arithmetics as we will see in the following example. The example is from the graduate level exams and is very similar to the ones that you will encounter in the banking exams. In the following question, numbers have been arranged in a pattern. Find the pattern and with the help of the rule, fill in the missing number of the final arrangement.

The Pattern of Ludo!

Answer: Again we will apply the same fundamental method. Take the largest number and try to get it from the other numbers that are left behind. We have two complete patterns, one to guess the rule from and the other to try it on. Once we have found a rule that works for both the arrangements we can use it to detect the missing number in the final one. Let us begin with the first arrangement. The largest number is 65 and we have to somehow get 65 from the numbers surrounding it i.e. 6, 7, 8 and 9.

Q 1: From the following table, find the missing number?

Q 2: In the space below, the pattern has a missing number. Pick that number from the options below: