Soil as a Detritus

Soil is something which we are surrounded by. People don’t pay much attention to it, and you also might not consider it to be much. However, it is a habitat for various animals that we cannot see from the naked eye. It is very much swarming with life and there are in fact different species and kinds which live in this detritus-based ecosystem.

It comprises of many earthworms and small insects which we see daily, but there are also microscopic organisms like bacteria and nematodes which are not visible to humans. These organisms inhabiting this ecosystem depend on detritus which is the plant and animal decay and waste. 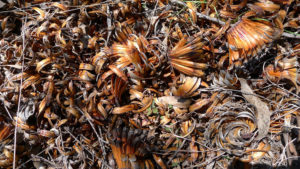 Detritus refers to the remains of dead plants and animals like fallen leaves, manure, and litter. It is a collective term given to all these things found in the soil.

There are various organisms like earthworms and millipedes that shred detritus in pieces for their living. This results in an easy attack on the remains by other microorganisms.

Similarly, the bacteria and fungi in the soil abstract the energy and nutrients they require growing from detritus as they break it down. Thus, this results in the formation of organic matter called humus.

Therefore, the fungi and bacteria can turn into food for little nematodes and insects, which in turn provide larger insects or animals like birds with a meal.

The accurate meaning of an ecosystem is a place or environment in which a set of organisms live. In any ecosystem, nutrients are recycled. This happens due to transfer from one organism to another which returns into the starting point.

We see that energy flows in a single direction. It originates from the source such as decaying plant over to organisms that use it who then become food for other organisms. As none of this energy conversion process is 100% effective, a significant fraction of the energy that goes into the soil ecosystem ends up wasted as heat.

You will notice that the sun is the eventual source of energy in this detritus-based food web. In other words, it means that the microorganisms of the soil extract stored energy by digesting decomposing plant matter. It is so because plants store the solar power in their tissues and leaves as chemical energy which these microorganisms consume.

Similar to any ecosystem, in this one as well energy flows in a single direction via the food chain. It starts from detritus through microorganisms to nematodes, insects and larger animals.

On the other hand, the nutrients cycle through the ecosystem. Meaning to say, the nutrients return to the soil whenever any of the organisms of the food web die. Thus, their nutrients go back in the soil only to re-travel the same path all over.

It is important to understand that not all organisms living in soil depend on detritus. For instance, some bacteria benefit from a mutual relationship with the roots of plants in the soil. That is, they offer valuable nutrients in return for food.

Moreover, this detritus-based food web is very crucial for the health of the soil. As it maintains a constant cycle of production of nutrient to consumption and then returns of it, it becomes quite vital. It also benefits plants by offering them humus for their growth.

Question- Which of the following is not included in detritus?

Answer– The correct answer is option C. Detritus does not include water as it only comprises of decaying and decomposing material.