Grasslands make up approximately a quarter of the total land surface. Climate plays an important role in the formation of grasslands. Grasslands are divided into two major categories which are temperate grassland and tropical grassland.

Plants mainly depend on the climate and soil. Therefore, the plants of temperate grasslands have a uniqueness of their own. In this topic, we will see details about Temperate Grasslands. 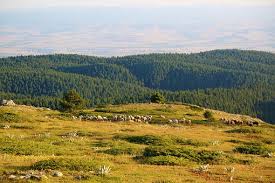 Grasslands are defined as places where grasses are dominating the trees and shrubs. Two major kinds of grasslands in the world are Savannas and Temperate grasslands.

Prairies have long grasses whereas steppes have short grasses, but both are Temperate Grasslands. The three most important features of temperate grasslands are their climate, soil and flora and fauna.

Features of the Temperate Grassland

Different types of grasslands have some similar characteristics. Savannas have scattered trees and exist in certain parts of Africa, South America, Australia, and Asia. Temperate grasslands are largely devoid of trees with less rainfall than savannas.

Steppes have shorter grasses whereas prairies have taller grasses due to higher precipitation. Both types of temperate grasslands exist throughout North America and Europe.

Rainfall plays a major role in the characteristics of the grasslands. The wetter regions produce longer grasses which experts call as prairies in North America, pampas in South America and the veldt in Africa. But the drier regions produce shorter grasses that call as steppes.

The grassroots grow much deep and have many branches. The decay of roots produces a deep, dark, coherent soil rich in nutrients and with fertile upper layers. These provide nutrients to the many kinds of grass and grassland plants that grow here.

Grasses make up the grassland plants life. But, still, there are many species of flowers that grow there. Seasonal drought, wildfires in the grass prevents the growth of large trees and shrubs. But willows, oaks, and cottonwoods grow where water is available.

Animals such as prairie dogs, wild horses, bison, jackrabbits, wolves, and deer live in the American prairies. The African veldt is having a varied group including gazelles, zebra, and rhinoceroses. Steppe fauna also includes rabbits, mice, antelope, badgers, foxes, and many others.

Some facts Regarding Temperate Grassland

Q: What are some examples of temperate grasslands?

Ans: Some examples are: