We can live without food for a week, without water a day or two, but without breathing? Not more than a minute. All of us are alive because we breathe, not just humans, but plants and animals also breathe. But how do we breathe? Let us find out below!

Breathing is a mechanical Process. In breathing, an organism takes in oxygen from its environment and released carbon- dioxide.Breathing involves the transport of oxygen and carbon dioxide between the external environment and the body cells. This process is also called pulmonary respiration.

Organisms carry out external respiration in various ways depending on their size and environment. For example, exchange of oxygen and carbon dioxide happens directly with the environment through any cell membrane. In human beings and some animals, lungs are the chief organs of breathing.

The process of breathing consists of two types:

Breathing is the combination of Expiration and Inspiration: 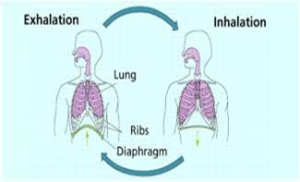 Comparison Between Breathing and Cellular Respiration

How Do We Breathe: Respiration

Breathing is the process that involves taking atmospheric air into lungs, where an exchange of gases and foul air occurs which is eventually expelled out from the lungs. The main muscles during respiration or breathing are Intercostal (external) muscles and diaphragm. Larynx does not contribute to the breathing movements. Breathing rate is lowest while we are sleeping. During normal breathing, the respiratory movements occur about:

Q. When is the breathing rate at its lowest?

Sol: The breathing rate is at its lowest during the night because our body is in rest at night.