Plants like other animals also respire. Plants also need energy. The plants get energy through the process of respiration in which glucose food breaks down in the presence of oxygen to form carbon dioxide and water with the release of energy.

This energy is used by the plant for carrying out its various life processes. Thus, Like other organisms, plants also respire for their survival. The respiration in plants differs from that of animals. In other words, in plants, each part can independently take in oxygen from air, utilize it to obtain energy, and give out carbon dioxide.

The leaves of plants have tiny pores on their surface which are called stomata. The exchange of gases in the leaves during respiration takes place through stomata.

This happens as follows: Oxygen from the air enters into a leaf through stomata and reaches all the cells by the process of diffusion. This oxygen is used in respiration in cells of the leaf. The carbon dioxide produced during diffuses out from the leaf into the air through same stomata.

The roots of plants are under the ground but root cells also need oxygen to carry out respiration and release energy for their own use.

How Does Respiration Occur in Roots? 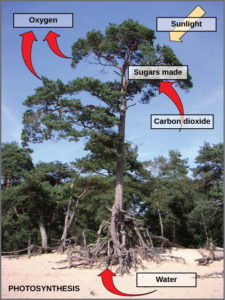 If a potted plant is over watered for a long time, then the plant may ultimately die. This is because too much water expels all the air from in between the soil particles. Due to this, oxygen is not available to the roots for aerobic respiration. In this condition, the roots of plant respire anaerobically producing alcohol. This may kill the plant. Germinating seeds during early stage respire anaerobically because they have seed coat which does not allow the oxygen to enter through it.

Respiration in plants happens throughout the day and night thereby carbon dioxide is produced. However, during the daytime, the amount of carbon dioxide released is negligible compared to the amount of oxygen produced as a result of photosynthesis. Hence, one should not sleep under a tree at night.

Learn more about Respiration and its types.

Q1. From where do roots absorb air needed for respiration?

Q2. Name the tiny pores on the surface of leaves of a plant through which gas exchange occurs.

Q3. Name any two parts of the plant through which exchange of gases takes place during respiration.