When you run, after some time don’t you run of breath and your breathing becomes heavy? But why does this happen? Well, this happens because your body at that moment needs more oxygen. In human respiration, we breathe in oxygen and breathe out carbon-dioxide. But is human respiration only this? Let us know more!

In all higher living organisms, the respiratory organ is lungs and gaseous exchange takes place from these lungs. The lungs are the most important organs that help human beings in respiration. Air is sucked into the lungs through a series of cavities and tubes which together make up the whole respiratory system. 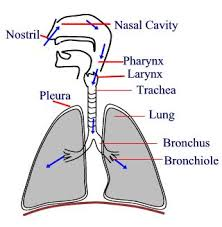 Respiratory system in higher organisms is divided into two parts-

Air enters the body through the nose. Externally, the nose consists of two nostrils. Nostrils are lined with membranes that are coated with a moist, sticky mucus. Some of the membranes have moving cilia.

As air passes over the membranes, it is warmed and moistened. Dust particles falling on the sticky surface are swept out by cilia, towards the throat, where they are either swallowed or coughed up. This removes most of the large foreign particles from the air.

The nasal cavity leads into the Pharynx. Posterior part of the nasal passage is called pharynx which is connected to the mouth. The air passes through the pharynx and enters the trachea, or windpipe, which is in the middle of the neck. The trachea is about 12 cm long and 2.5cm in diameter. 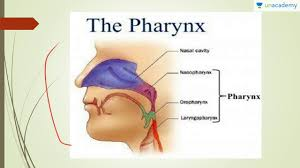 The trachea divides into two tubes, The right and left bronchi. After air has passed through the trachea, it enters the bronchi. Each bronchus enters a lung. Air is further pulled into branches of the bronchi. The bronchi then divide into smaller tubes called bronchioles. 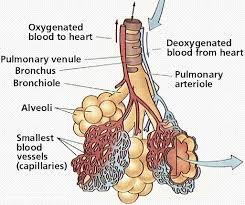 5. The Thoracic Cavity and Diaphragm 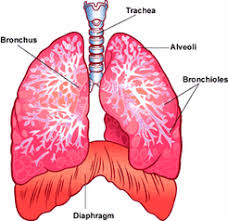 The lungs are a pair of elastic organs present in the chest or pleural cavity of the body. The sides of the chest are bounded by the ribs, which are joined to the backbone at the back and the breastbone at the front. The pleural cavity contains pleural fluid allows membranes to move easily on one another while breathing and keeping lungs always moist and help them in the breathing process.

The right lungs are somewhat larger than the left lung and are divided into three lobes, while the left lung is divided into two lobes Adult lungs have an internal area near about 90meter square.The whole area is covered with a net of tiny blood vessels, which is joined, end to end cover several thousand meters. 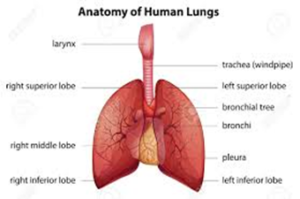 Q. In the normal expiration, the diaphragm is: 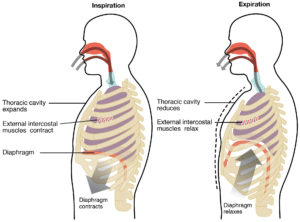 During expiration, the intercostal muscles and the diaphragm are relaxed leading to decrease in the volume of the thoracic cavity so that the air is expired from the lungs. The relaxed diaphragm gets arched up forming a dome.