Reproduction in human beings is by sexual reproduction where both the male and female gametes fertilize to give rise to an embryo. The fertilization of human embryo occurs inside the body of the female. Thus, it is called Internal Fertilization. Human Beings are viviparous organisms who give rise to Embryos directly instead of laying eggs. Let us understand a little more about the male and female reproductive organs and the process of fertilization in them. Laydig Cells of the testes synthesizes Testosterone. The hormone testosterone not only helps in the formation of the sperm but also in the development of secondary sexual characters in males such as deepening of the voice, facial and pubic hair during puberty.

The female reproductive system in humans in entirely within the pelvic cavity. It comprises of the following structures:

The egg is formed under the influence of both female sex hormones estrogen and progesterone. This process is known as Oogenesis.

Process of Fertilisation and Further Development

The male gametes i.e the sperms are deposited in the female body by the process called as sexual intercourse. Once the sperms are deposited in the vagina, they need to travel upwards to reach the egg that is released from the ovaries and picked up by the fallopian tubes. When the sperm meets the egg, it needs to penetrate through its layers to cause fertilization. Both the Egg and the Sperm fertilize and form the diploid zygote.

Each parent provides 23 chromosomes at the initial fertilization. Thus, the zygote contains double the number of chromosomes (46). It is called diploid. Once this happens, zona pellucida from the egg forms a thick layer around the zygote to prevent more than one sperm to fertilize the egg. this zygote now forms into a morula and then into a blastocyst. It then develops chorionic villi from the outer layer of the blastocyst known as the chorion.

These villi attach themselves to the inner wall of the uterus. Implantation is the process of attachment of the embryo to the uterine wall. The tissues between the growing embryo and the mother’s uterine walls form the placenta. Placenta functions to provide nutrition to the embryo until its birth. The hormones estrogen and progesterone both help in maintaining the placenta and the fetus inside the uterus. The normal gestation period for humans is 38 weeks which is a little over 9 months.

At the end of this term, the uterine contractions begin under influence of hormones. A major hormone that plays a role in this is oxytocin. It affects the cervix and causes it to dilate to allow the baby to pass outside the body of the mother. The umbilical cord with its blood vessels and the placenta are also expelled along with the baby.

The mother’s hormones come back to normalcy from the next menstrual cycle. 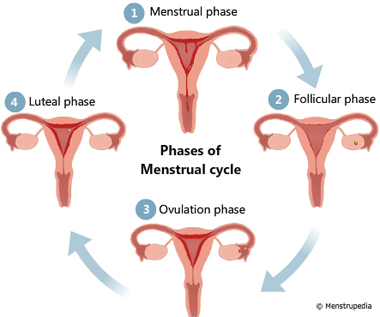 This is a biological process that occurs in human females from the time they attain puberty. When a girl child is born, the primary oocytes already occur. When the child reaches puberty, the process of meiosis continues to give rise to the secondary oocyte. This secondary oocyte is released from each ovary alternatively in every alternate month.

Each ovary releases this secondary oocyte alternative The fallopian tube picks it up and transports it to the uterus. The surface of the ovary that has released the egg is called the corpus luteum. It releases progesterone. If the egg doesn’t fertilize, the corpus luteum disintegrates after 14 days and the progesterone levels fall.