We’re a selfie-obsessed and a photogenic generation. Today everything and anything has a profile somewhere or the other. Do you know even soil has one? Don’t believe us? Look for yourself. Scroll to see ‘Soil Profile’.

Table of content
1 Suggested Videos
2 Formation of Soil
2.1 Browse more Topics under Soil
3 Soil Profile
4 Horizons of the Soil
4.1 1. Horizon A or Topsoil
4.2 2. Horizon B or Subsoil
4.3 3. Bedrock or Horizon C
5 Question For You

The soil has taken thousands of years to form. Soil formation takes place in the following ways:

What are the causes of Thunderstorms and Cyclones?

The soil is found in layers, which are arranged during the formation of soil. These layers called horizons, the sequence of layers is the soil profile. The layers of soil can easily be observed by their color and size of particles. The main layers of the soil are topsoil, subsoil and the parent rock. Each layer has its own characteristics.

These features of the layer of soil play a very important role in determining the use of the soil. Soil that has developed three layers, is mature soil. It takes many years under a favorable condition for the soil to develop its three layers. At some places, the soil contains only two layers. Such soil is immature soil.

Horizons of the Soil

Soil consists of the following horizons:

1. Horizon A or Topsoil

It is also called the humus layer, which is rich in organic material. This layer consists of decomposed material and organic matter. This is the reason, the topsoil has a dark brown color. The hummus makes the topsoil soft, porous to hold enough air and water. In this layer, the seeds germinate and roots of the plants grow. Many living organisms like earthworms, millipedes, and centipedes, bacteria, and fungi are found in this layer of soil.

What are the different Properties of Soil?

2. Horizon B or Subsoil

Just below the topsoil lies another layer called subsoil or horizon-B. It is comparatively harder and compact than topsoil. It is lighter in color than the topsoil because there is less humus in this layer. This layer is less organic but is rich in minerals brought down from the topsoil. It contains metal salts, especially iron oxide in a large proportion. Farmers often mix horizon-A and horizon-B when ploughing their fields.

What is Soil Erosion?

Bedrock is also known as parent rock and lies just below the subsoil. It contains no organic matter and made up of stones and rocks, so it is very hard. This layer represents a transition zone between the earth’s bedrock and horizon A and B. 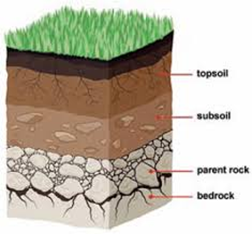 Q. What is humus layer in the soil?

Ans: It is also called topsoil or horizon A, which is rich in organic material.This layer consists of decomposed material and organic matter. This is the reason, the topsoil has dark brown color. The humus makes the topsoil soft, porous to hold enough air and water. In this layer, the seeds germinate and roots of the plants grow. Many living organisms like earthworms, millipedes, and centipedes, bacteria, and fungi are found in this layer of soil.