The farmer’s friend, the humble earthworm is an annelid that helps retain the fertility of the soil. This is an invertebrate animal that lives mostly in the upper layer of the soil. The fecal deposits of the earthworm are called as worm castings. And, if you see these worm castings in the soil in your garden, then you can surely see a few earthworms if you dig into the soil. Scientifically, earthworms are known by the Genus name Pheretima. Read along to more about this terrestrial invertebrate.

Earthworms have a reddish brown color with a cylindrical body. The body is also elongated and is pointed in the anterior region, while the posterior region is rounded. The body is segmented and there are about 100 to 120 metameres or short segments. There is a dark median mid-dorsal blood vessel that is seen on the dorsal surface of the body. The ventral surface of the body has genital openings or pores.

Peristomium is the first body segment that also has the mouth. The last segment has the anus. In between segments 14 to 16, there is a prominent dark band of glandular tissue called as the clitellum. These are the fused segments. Between the 5th, 6th, 7th, 8th and 9th  intersegment, there are four pairs of spermathecal apertures present. On the 14th segment, in the midventral line, a single female genital pore is present.

A single pair of male genital pores is present on the 18th segment. There are many minute pores called the nephridiopores on the surface of the body. Except for the first segment, last segment, and clitellum, all other segments have S-shaped setae that are present embedded. These setae help in the locomotion.

The body of the earthworm is covered externally by a thin noncellular cuticle. This is followed by an epidermal layer, two muscle layers, and inner coelomic epithelium. The epidermis has columnar epithelial cells, which are present in a single layer. There are also some secretory gland cells present.

It is a straight tube that is present from the 1st segment to the last segment of an earthworm’s body. The anterior part of the body has the mouth that leads to a buccal cavity. This, in turn, leads to the muscular pharynx, after which is present the oesophagus and the muscular gizzard.

The muscular gizzard is a structure that helps in the grinding of the soil particles that are mixed with the organic matter and other decayed leaf particles. The gizzard leads to the stomach, which is present from 9th to 14th segments. In the stomach calciferous glands are present. They neutralize the humic acid that is present in the humus. (Humus is the organic matter of the soil that is formed due to the decomposition of leaves and other plant material)

The stomach leads to the intestine which begins from the 15th segment and continues till the last segment of the earthworm’s body. On the 26th segment, there is a pair of short and conical intestinal caecae. After the 26th segment, there is an internal median fold of dorsal wall called typhlosole, which is a characteristic feature. Typhlosole helps in increasing the area of absorption.

The anus is the small aperture through which the alimentary canal opens out. The food ingested by the earthworm passes through the alimentary canal, where the food is digested and broken down into simpler substances and absorbed through the intestinal membranes. Any insoluble and undigested food particles along with the soil particles are thrown out of the anus and are called as worm castings. 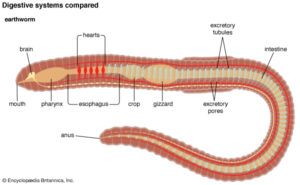 Earthworms show a closed blood vascular system. It means that blood flows in closed blood vessels. The circulatory system consists of blood, blood vessels, capillaries, and heart. Blood is circulated in one direction due to the contractions. The 4th, 5th and 6th segments have the blood glands, which produce the blood cells and haemoglobin.  The blood cells do not have haemoglobin and are phagocytic.  It is dissolved in the blood plasma.

There is no specialized system present here. The exchange happens through the moist body surface.

There are ganglia that are arranged in a segment-wise manner on the ventral paired nerve cord. Ganglia are nothing but the mass of nerve cells. The nerve cord in the 3rd and 4th segments bifurcates and laterally encircles the pharynx and joins the cerebral ganglia dorsally to form a nerve ring. This integrates the sensory input and also commands the muscular responses of the earthworm.

The excretory system consists of coiled tubules called nephridia. They are arranged on the segments of the body. Depending on the location, these nephridia are of three types. They are septal nephridia, integumentary nephridia, and pharyngeal nephridia. All the nephridia have a similar structure. They are responsible for maintaining the volume of the body fluids.

Earthworms have both the male and female reproductive organs in the same body. Hence they are called hermaphrodite or bisexual. They have two pairs of testes in the 10th and 11th segments. In between the 12th and 13th segments, there is a pair of ovaries. Sac-like structures called spermathecae (four pairs) are found in the 6th and 9th segments. These structures receive and store the spermatozoa during copulation. There is no larval form. Earthworms develop directly.

Q: The female genital aperture in earthworms is present ventrally on the segment

Ans: The correct answer is “C”. The oviducts are two short conical ciliated tubes. The oviducts run posteriorly and converge to meet below the nerve cord forming a very short common oviduct. It opens to the outside by a single median and ventral female genital aperture in the 14th segment.